We're not exactly sure why, but LG has developed a gigantic new device called the Optimus Vu. And while the growing market for "mega-phones" seems to be getting more and more crowded every day, we have to say, LG's takes the cake for ridiculousness. The Vu's 5-inch display may not be absurdly large, but it is absurdly shaped. A 4:3 1024x768 (think CRT, Windows 98, etc.) display on the device makes it ridiculously wide, and also very oddly proportioned. I tend to think this is yet another device that will end up with 3rd-party app compatibility issues due to its unique resolution - something Kyocera Echo owners can probably... echo. 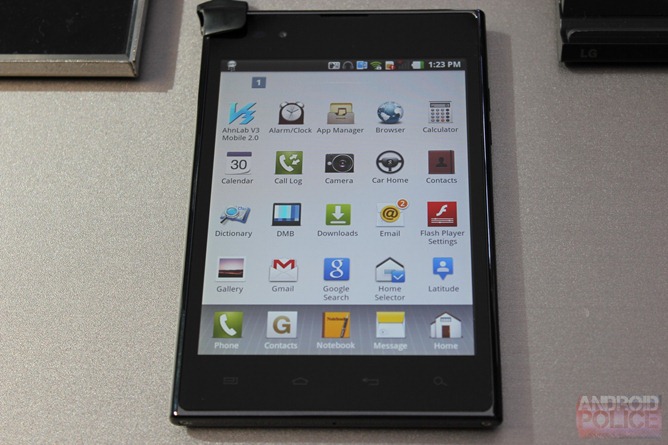 But overall, it's not too bad to use in terms of performance. While it is packing Gingerbread and LG's god-awful UI overlay, it runs relatively smoothly, and in our short time with it we found it to be glitch-free. Considering LG's past Android phones, this is a marked improvement. Still, there's also not a lot of reason to love this phone, either. LG has tried to jump on the Note bandwagon with a stylus accessory, but it's one of those silicone-tipped ordeals that's not particular sensitive or accurate.LTE connectivity is on-board, so we halfway expect a Verizon version to be in the works, but that's obviously not something we could confirm.

Really, I look at this phone and see a concept more than a product. An interesting idea, perhaps, but something I would ever consider buying? Probably not. Check out our hands-on, below: