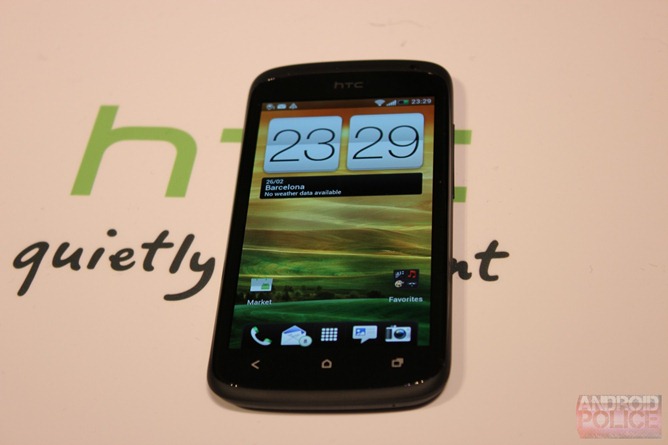 The main difference between the two lies in the displays. The One S packs a 4.3" SAMOLED qHD display (540x960), while the One X has HTC's new 4.7" S-LCD2 HD screen (1280x720). Both share the same Qualcomm S4 dual-core processor, clocked at 1.5GHz (the international version of the One X will have a quad-core Tegra 3, but not in the US). As you'll see in the video, the One S is absolutely buttery smooth running Android 4.0, which we were quite happy about.

Another of HTC's big new additions comes in the form of Image Sense, utilizing a new 8MP camera, HTC's own post-processing software, and camera app. The result is absurdly fast image captures (0.7 seconds on individual shots), with the option to capture nearly a dozen shots in just a few seconds. Check out the videos to see the rapid fire mode in action.

The black version of the One S also features an "oxidized" aluminum shell (utilizing lightning and magic, as HTC showed us in a video), resulting in a ceramic-like substance you'll have touch to believe. It really does feel extremely sturdy, and puts plastic devices to shame - I can't say I'd ever want to go back to a "normal" feeling Android phone.

The one drawback here is undoubtedly the fact that this wonderful chassis results in a non-removable back cover, so that battery is staying in there for the duration. This also means no microSD slot. Still, I think the sacrifice is worth it. While a microSD slot would be nice, I can't say I'm bothered about the prospect of no external storage - 16GB has generally been plenty for me. For storage fiends, though, it may prove inadequate.

But our least favorite part of this otherwise awesome piece of hardware was HTC's Sense 4.0 UI. While certain apps like the new in-car mode impressed us, the launcher looks as dated and ugly as ever (a lot like an amateurish ADW or LauncherPro skin), the notification bar (the battery icon in particular) is equally unrefined, and the new app drawer resembles a gimmicky homebrew next to the beautiful pagination effect of stock Ice Cream Sandwich. While it does all work very smoothly, it's hard to say that makes up for some of these questionable design decisions. It's clear that even under HTC's new product strategy regime, Sense's reign over Android remains despotic.

While as a phone the One S (and the One X, by relation) looks very promising, we hope that HTC has some visual revamping planned for Sense in the near future.

Check out our hands-on videos, below.