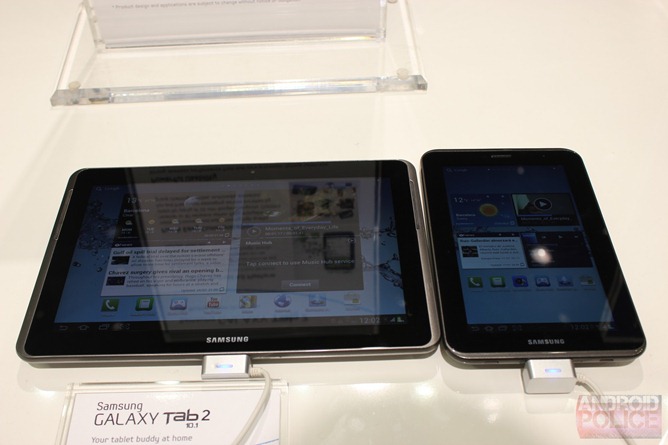 In fact, on paper, both of these devices are actually very boring. But there's a key piece of information Samsung hasn't announced about these devices: pricing. Both are obviously intended for lower price points, as opposed to new flagship hardware. This strategy makes sense. With the Kindle Fire, ASUS's new $250 Tegra 3 tablet, and a bevy of other cheap tablets on the market, Samsung must be looking into extending its success on the high-end into the mid-range. Still, the run-of-the-mill specifications are a little difficult to get too excited about, given that things like ASUS's quad-core budget tablet would presumably run circles around them.

Using the devices wasn't particularly exciting, either. Ice Cream Sandwich ran smoothly, but not to such an extent as to really impress us. Again, it all comes down to how these devices are priced, and we are expecting that price to be cheap, hopefully very cheap. Check out our hands-on, below:

Google Teases MWC Attendees With Bowl Of Jellybeans, Coyly Asks, "Oh, Is That Not What You ...