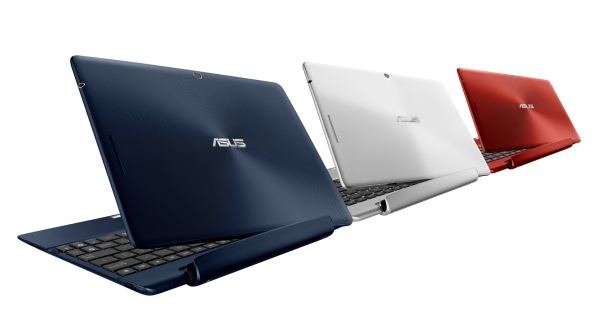 The tablet packs the same Tegra 3 SoC as its big brother, though we'd imagine it's clocked a little slower than the Prime and Infinity variants. It also contains the same 22Whr battery and 1GB of RAM. The major difference, thankfully, isn't in lower specs or older versions of Android, but in materials. The Transformer Pad 300 Series is made of plastic, instead of the aluminum cases that ASUS' higher-end tablets have. It's nice to see a company cut costs without shooting performance in the foot for once.

The tablets come in three colors that are totally not in any way U.S.-themed. Each has its own optional, colored laptop docks as well. The tablets will start at $399, which makes them slightly cheaper than the Transformer Prime, and comfortably below the iPad's base price of $500.

Here's a closer look at the specs:

As usual, there's no word on pricing or availability yet. We're also still waiting to hear about that mythical $250 Tegra 3-powered 7" tablet ASUS announced at CES, so add this to the list of slates that we can't wait to see hit the market. We're not sure where you are, Motorola and HTC, but it looks like ASUS—and to a lesser extent Samsung—are running away with the Android tablet market.

[MWC 2012] ASUS Details Padfone Specs, Crams A Snapdragon S4 Inside Your Phone, Inside Your Tablet