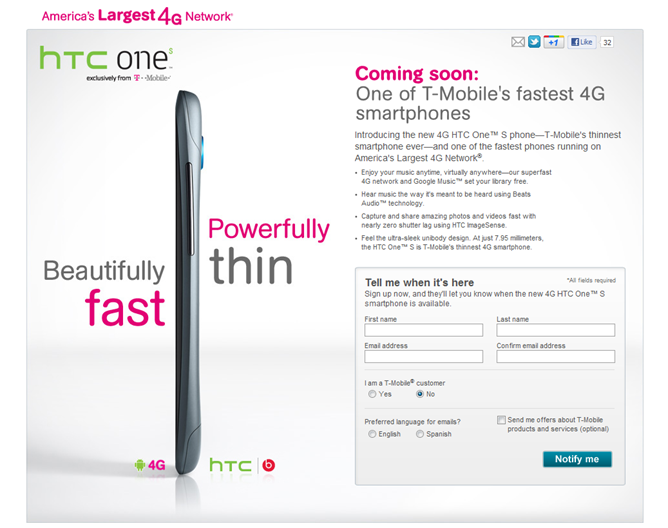 The HTC One S sports a 1.5GHz dual-core Snapdragon S4 processor, Android 4.0 with the newest Sense 4 and Image Sense, an advanced 8MP camera with an F/2.0 lens and 0.7s shot time as well as HSPA+42 capabilities on the network side. This sexy beast is going to show up in T-Mobile's stores this spring, though I wouldn't expect it sooner than April, as that's the month some of the other carriers are mentioning at the moment.

T-Mobile Brings HTC One S to the U.S.

BELLEVUE, Wash. — Feb. 26, 2012 — Today at Mobile World Congress 2012, HTC announced the upcoming availability of the HTC One™ S, with T-Mobile® as the premier launch partner in the U.S. Expected this spring, the HTC One S is T-Mobile’s thinnest smartphone (7.95mm), featuring an ultra-sleek, aluminum unibody design. The next smartphone to take advantage of 4G technology (HSPA+42) running on America’s Largest 4G Network, the HTC One S is T-Mobile’s first product to ship with Android 4.0 (Ice Cream Sandwich) and HTC Sense™ 4.

With access to T-Mobile’s fastest network speeds, the HTC One S allows for a high-quality entertainment experience, which is also enhanced by Beats By Dr. Dre™ technology. The Beats Audio integration in the HTC One S is enabled for richer, more authentic sound when consumers listen to music.  The HTC One S also makes it simple to get and listen to music, with Google Music pre-loaded on the device for easy cloud-based access to the user’s personal music collection.

“We’re thrilled to partner with HTC on the launch of its new HTC One series of smartphones and to bring the HTC One S to the U.S.,” said Andrew Sherrard, senior vice president, marketing, T-Mobile USA. “With the HTC One S, we’re not only delivering on our promise to bring leading-edge technology to market but are continuing to provide customers with the best 4G entertainment experiences from listening to high-quality music to streaming high-resolution movies.”

Consumers increasingly expect smartphone camera technology that offers the ability to capture life’s moments with high-quality photos and videos – and the HTC One S delivers. Joining
T-Mobile’s best-in-class lineup of advanced camera smartphones from HTC, the arrival of the HTC One S marks the introduction of HTC’s new amazing camera experience that rivals traditional digital cameras. With the introduction of HTC ImageSense™, improvements are brought to every part of the 8-megapixel camera, including lens, the sensor and the software. Camera enhancements include:

· Superfast Capture – The HTC One S dramatically reduces the time it takes to capture those key moments, with an estimated 0.7-second shot time and a 0.2-second autofocus that allows for nearly unlimited continuous shots.

· Concurrent Video/Still Capture – HTC One S lets the user capture a shot and shoot video at the same time – perfect for capturing life’s moments as they happen. While shooting 1080p HD video, consumers just need to tap the shutter button and the device snaps a high-resolution still photo while the video continues to shoot.  Consumers can also capture a still from a previously recorded video.

“People take photos on their phone more than any activity other than making phone calls, which is why we improved every part of the camera experience on HTC One S,” said Jason Mackenzie, president, global sales and marketing, HTC Corporation. “We’re thrilled to bring our combination of our premium design, amazing camera and authentic sound to T-Mobile customers in the U.S.”

The HTC One S will be one of the fastest smartphones running on America’s Largest 4G Network, with access to T-Mobile’s fastest 4G (HSPA+ 42) speeds, currently available in 175 markets, reaching more than 180 million Americans. Equipped with a 1.5GHz dual-core Snapdragon S4 processor by Qualcomm®, the HTC One S delivers powerful performance while Web browsing, streaming movies and watching TV shows on the device’s 4.3-inch qHD Super AMOLED touch screen.

The HTC One S is expected to be available this spring from T-Mobile at retail stores, select dealers and retailers nationwide, and online at http://www.t-mobile.com. For more information, visit http://htc.t-mobile.com/one/s-4g-phone or http://www.htc.com/us/products/htcones-tmobile.