Sony's portfolio of non-Ericsson branded phones has just received two more additions, though they aren't much more than variations than the already-announced Xperia S.

The Xperia P features: a 4-inch "WhiteMagic" display, optimized for viewability in direct sunlight (for comparison, the Xperia S has a 4.3" display). It also features a 1 GHz dual core processor, 8 megapixel camera, NFC, and HDMI connectivity. The Xperia P will also launch alongside the SmartDock, which allows content on the phone's screen to be streamed to a TV.

The Xperia U is similar, but offers a nice alternative for those who aren't interested in the recent slew of giant phones. It features a 3.5" Reality Display, 1 GHz dual core processor, and a 5 megapixel camera.

Both devices are running Android 2.3 with a custom skin by Sony, but should both receive an upgrade to Ice Cream Sandwich sometime after launch. Read the full press release below. 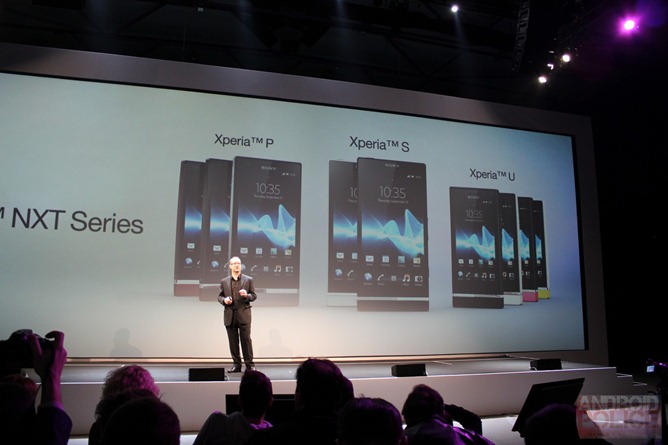 Sony Mobile Communications today unveiled the latest additions to its Xperia™ NXT series - next generation smartphones from Sony, the new Xperia P and Xperia U. In addition, Xperia S, the ultimate HD smartphone, is now shipping to markets across the globe, with first sales in the Sony Style store in Barcelona during Mobile World Congress. Xperia P and Xperia U will be available to consumers globally in the second quarter of this year.
Xperia NXT series - a connected entertainment experience
Incorporating the best of Sony technology and premium entertainment, the Xperia NXT series is a cornerstone of Sony's connected experience. With easy connectivity, consumers can enjoy and share content on whichever screen best suits them, whether it's their smartphone, TV, laptop or tablet.
With the next generation of smartphone design from Sony, the Xperia NXT series has a look that is instantly recognisable. These smartphones have intriguing design features including the "transparent element", a band that encircles the base of the phone and also integrates invisible antenna components. The transparent element illuminates when receiving calls, texts and notifications.
The new User Interface (UI) follows the same design principles and enhances the Android™ experience - offering rich applications and content with a simple and clean look. A new album, video player and music player will deliver compelling entertainment experiences and the new UI design also allows consumers to access their favourite application direct from the lock-screen.
Xperia P and Xperia U boast Reality Display powered by Mobile BRAVIA® Engine for razor-sharp clarity, along with fast capture to take the camera from sleep to snap in a little over a second with a single key press. Both smartphones come with powerful 1 GHz dual-core processors for super fast performance.
As with Xperia S, Xperia P and Xperia U connect consumers to premium entertainment experiences with access to the Sony Entertainment Network*. Out of the box, consumers can watch the latest Hollywood blockbusters on Video Unlimited or listen to millions and millions of songs** through Music Unlimited.
Xperia P - ultra-bright viewing experience
With a full aluminium unibody design, Xperia P debuts WhiteMagic™ display technology from Sony for the first time on a smartphone. WhiteMagic technology delivers the brightest viewing experience; whether at the beach or on the ski slopes. Smart power efficiency automatically adjusts the brightness of the screen to the surroundings to conserve battery life.
The new SmartDock, exclusively for Xperia P, offers simple connectivity to multiple screens, turning the smartphone into an entertainment hub for the living room. Using a TV remote control consumers can easily navigate their smartphone's media content to watch their HD videos, the latest movies or favourite TV shows on the big screen. With USB support in the SmartDock, they can also use a wireless keyboard and mouse to write emails, browse and post on Facebook or watch videos from YouTube on their TV.
Key features for Xperia P
4" Reality Display with powered by Mobile BRAVIA Engine.
WhiteMagic™ display technology for an ultra-bright and power efficient viewing experience.
1 GHz dual-core processor for super fast performance with 16GB flash storage.
8MP camera with unique fast capture, HD recording and Sony technology to capture 2D and 3D panoramic images.
Easy HDMI and DLNA connectivity to share content on any screen.
NFC (Near Field Communications) enabled to access a growing range of NFC applications and services as well as Xperia SmartTags.
Available in a choice of silver, black and red, all with an aluminium unibody.
Launches on Android platform 2.3 (Gingerbread), upgrade to Android platform 4.0 (Ice Cream Sandwich) during the second quarter of 2012.

Xperia U - powerful Sony entertainment in a stylish and compact design
Xperia U combines powerful Sony entertainment in a stylish and compact design that consumers can personalise inside and out. With xLoud™ and Sony 3D surround sound audio technology integrated into the music player, consumers will enjoy a crisp and loud sound experience. They can also stream music from their Xperia U to wireless speakers with a touch using DLNA.
In Xperia U the transparent element illuminates to match the colour of photos viewed in the gallery or the album art of music tracks currently playing. Xperia U can also be personalised with exchangeable caps and themes to reflect consumers' personality and mood.
Consumers listening to music on their Xperia U can also enjoy improved sound quality with the stylish new Smart Headset for Android smartphones, which features SmartKey - a dedicated application launch key that consumers press once to launch a favourite app.
Key features for Xperia U
3.5" Reality Display powered by Mobile BRAVIA Engine.
1 GHz dual-core processor for super fast performance.
5MP camera with unique fast capture, HD recording and Sony technology to capture 2D and 3D panoramic images.
Crisp and loud listening with xLoud and 3D surround sound audio technology.
Available in a choice of white or black, with pink and yellow exchangeable caps for the base of the smartphone in the box.
Launches on Android platform 2.3 (Gingerbread), upgrade to Android platform 4.0 (Ice Cream Sandwich) during the second quarter of 2012.

[Weekend Poll] Let's Talk Music Apps: What Flavor Do You Use?