If you've downloaded anything Temple Run-related from the Android Market, you've been scammed. We do our best to keep you informed, but this app in particular seems to spark a lot of fakes. Thankfully, Imangi Studios, the developer behind Temple Run, announced on their Facebook page that the app isn't out yet, but when it is the company will announce it at least a week in advance.

The sheer number of scam apps that have been appearing in the Android Market is astounding. However, none of them are legit. Here's the word from Temple Run's official Facebook page: 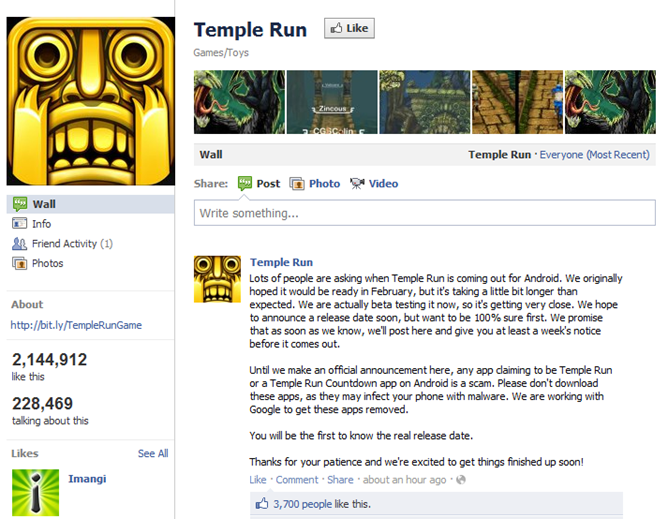 For the impatient: no, it's not out yet, yes everything on the Market claiming to be related to Temple Run is a scam, and you will have at least a week's notice from Temple Run's official Facebook page before the game comes out. If you're looking for this game, you're going to want to stop checking the Android Market and subscribe to Temple Run's Facebook page.

Of course, the best way to stop these kinds of apps (short of Google instituting a review process for apps on their Market which is a debatable move in itself) is to stop downloading them. Somewhat unnervingly, though, Facebook commenters on this very status are commenting that the game is out and that they just downloaded it. Sometimes it's just an uphill battle to educate users.

As always, be careful what you download, even from the Android Market. If you're eagerly awaiting this game, we strongly recommend subscribing to the game's official Facebook page at the source link below. You can also check out Temple Run's official Twitter feed which sounds just as exasperated by the fakes as you are.

Download APKs Directly From The Web Market To Your Computer With The 'APK Downloader' Extension ...

[Rumor] Samsung's Galaxy S III To Be Launched In Over 50 Markets Simultaneously, Bringing A ...