Over on Motorola’s support forum, the company is recruiting 1000 customers to test and provide feedback on a Gingerbread software upgrade for the CLIQ 2. This usually heralds the coming of a software update available to the unwashed masses. While customers who buy devices like the CLIQ 2 may not be the same folks who are eager for the latest and the greatest software updates, Gingerbread will be arriving about 14 months after it was announced, and 13 months after the phone was released. 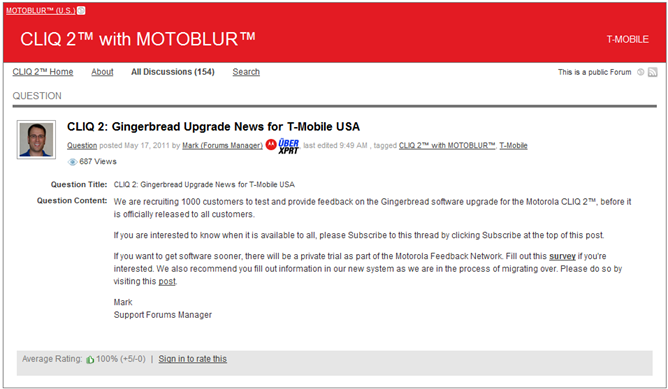 The CLIQ 2 is one of the few devices left that still uses the old-style MOTOBLUR interface that was first introduced with the original CLIQ. Since then, Motorola has moved to a more subdued, less awkwardly-social skin for their devices. In fact, recent leaks showing skinned Motorola devices running ICS are among the least objectionable that we've seen. While Gingerbread wasn't known for being as beautiful as ICS is, it still stands head and shoulders above the original MOTOBLUR skin. Hopefully this update will follow Motorola's new stance for skinning rather than its old stance.

Android 4.0 ROMs Leak For The Acer Iconia Tab A500 And A100 Ahead Of April Release

[Update: It's Back] Verizon's LTE Network Down Again, Leaving Many Users Across The Nation ...