As many of the Android-faithful know, Apple recently implemented as part of iOS 5 the "Notification Center," and it looks an awful lot like Android's in some respects. This immediately drew criticism from the Android community, with many claiming that Apple had essentially "ripped off" Google's implementation, and has been a sore subject ever since.

So when news of this notification patent started spreading, many were quick to hold it up as Android's newest weapon against Apple's legal onslaught. No doubt, it also bestowed a sense of vindication among Android fans - who's got the patents now, Apple? But it's just not that simple, and I'm going to show you why. But first, we need to talk a little about patents.

If you're not versed in how one goes about filing (or, as is said in the legal profession, prosecuting) a patent, you may not know how a patent is basically structured.

Now, the specific description of the invention is generally important when determining how to actually interpret the claim language of a patent, and for figuring out if two similar inventions that accomplish similar tasks are actually, technically similar enough that one must be infringing the other. These kinds of questions are so technical and far beyond the average person's knowledge that they're often left to judges to decide in what are called "claim construction" hearings through the use of so-expensive-it-would-make-you-sick expert witnesses.

They're always a relevant issue, and always debated in patent lawsuits, especially in high-tech cases, but we'll only be looking at this section as it applies specifically to some of the claim language, and in a pretty simple way.

What we're here to talk about are claims, then.

Basically, the claims need to sync up with what is described in the specific description section - if a claim could be interpreted to extend beyond the scope of the invention as described, it has to be narrowed or stricken from the patent.

Still with me? I know, it's getting complicated - but we're about to reach the meaty part of the discussion, and you probably need this primer to really understand what I'm about to explain.

So, What Does This Have To Do With The Notification Bar?

Everything. Let's talk about the claims in Google's patent application, shall we? US20090249247A1 (catchy name, eh?) was filed over 3 years ago - January 2009, by Erick Tseng, then a senior project manager for Android at Google (he now works for Facebook).

In this patent, titled "Notification of Mobile Device Events," I have identified what amount to three major claims of a total 22. Because this is only an application, Google's lawyers have drafted a "dream team" of claims. It's a common practice in patent law (and frankly, all types of law) to over-file to some extent, and then negotiate down to what's actually realistic.

Case-in-point is Google's 4th major claim, #21, which claims the following:

a wireless interface to receive data that includes messages for a user of a mobile device;

a notification manager, operable on a computer processor, to generate a notification message for a received message that includes information that describes the message; and

means for generating a display of information corresponding to the notification message on a graphical display.

Here, Google is attempting to claim, basically, the entire concept of a notification system. It seems possible, even likely, that this could be interpreted as covering Apple's (or even Palm's) older notification implementation, or any kind of pop-up notification. This one is a definite longshot.

But let's hop over to the first major claim. It seems likely to me, upon examining the language carefully, it would be infringed by Apple's Notification Center. Here's claim #1:

receiving a selection in the status area by a user of the mobile device; and

You'll note that I've highlighted the phrase "in a status area." There's a good reason for this - this is what we call limiting language. Google has confined the definition of this claim to include only implementations of a notification event in the "status area." Of course, what is a status area? Google defines it earlier in the application as the following:

... a peripheral area at the edge of a display, such as a status area, or status bar, for the mobile device. The status bar is the area in which status indicators such as battery charge level and signal strength level are traditionally displayed—typically at the top of a display. 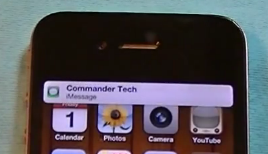 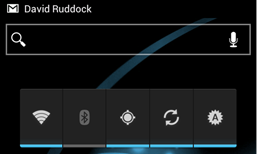 Compare the instant the notification arrives and how it appears in relation to the status bar.

Yes, such minute distinctions are actually relevant to the debate here, because it is undoubtedly a point Apple's legal counsel would hammer on when denying an accusation of infringement.

Google's implementation, on the other hand, merely clears the status bar of all battery, signal, and other information in order to display the notification - actually utilizing the status bar. At this point, I would probably call to a concept called the "doctrine of equivalents," which (to oversimplify it a bit) basically says that if one invention doesn't actually literally infringe on the language of a patent claim, if it works in essentially the same way to achieve essentially the same end goal, it's still infringing.

This kind of argument may come down to coding implementations or other technical details, though - so I won't delve into it further. But there is a reason that the first claim should be interpreted to include Apple's implementation. The second claim specifically encompasses the method by which Google provides notifications in Android:

2. The method of claim 1, wherein the notification is displayed in place of battery and signal elements in a status bar that comprises the status area of the graphical interface.

This would, by simple logic, mean that claim #1's definition of "in a status area" encompasses implementations beyond the one Google uses (placement in the actual status bar). At least, that's the argument I'd make.

The "selection in a status area" language merely means that the user provides some sort of input in the status area (where the notification immediately populates) to learn more about the notification - either a pull-down or a press (iOS does both, Android usually only does the pull-down method, except on tablets). iOS clearly infringes on this element.

The third clause about a "central zone" of the GUI displaying "text from the messages" refers to the whole notification center pull-down that aggregates notifications and, if applicable, makes some mention of their content. It's pretty obvious Apple's implementation infringes on that element of the claim, as well. Just compare to Android: 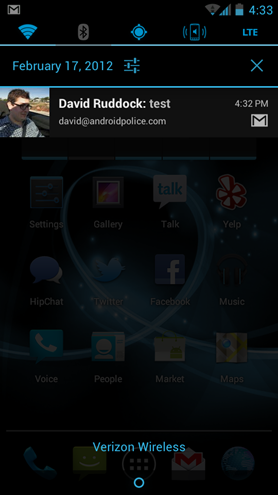 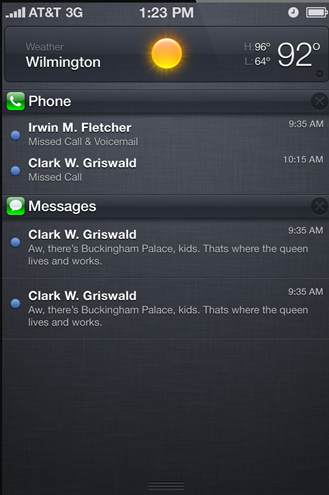 Note that both pull down via the status bar, both aggregate multiple notifications, and both display some of the content of messages.

Although obviously different aesthetically, the concept as defined in the above element from claim #1, without a doubt, describes both of these notification systems.

a wireless interface to receive data for a user of a mobile computing device;

an electronic input device to receive a user selection in the first zone, wherein in response to the user selection, the display manager displays, in a central zone of the graphical interface, detail information regarding a plurality of recent messaging events for the mobile device.

Based on the language here, I would say that this claim attempts to patent any system by which notifications are sent to a device, and that causes them to appear in or around a "status area" (a "first zone near a perimeter") which can than be selected to display a centralized list of notifications. This is definitely broader than claim #1, and almost certainly would be infringed on by iOS 5's Notification Center. But there's one big caveat I haven't mentioned yet about this whole patent.

Published vs. Issued: In Limbo

You'll notice that if you try to find this patent in the USPTO's public database, it's not there. That's because this patent is still in the process of prosecution, meaning language changes, potential removal of some claims, and amendments are probably all still being worked out between Google and the patent office.

Under US law, you can sue for damages caused during the published but yet-to-be-issued phase, but not until the patent is actually issued. This is why Google has yet to sue Apple, at least that's the case if we're assuming Google would want to sue Apple at all on this patent. In fact, we don't even know if Google will get this patent in the first place, prior art could very possibly kill it, and I'm sure Apple and others are working hard to generate all the prior art they can to make that happen.

At this point, we'll just have to wait and see how this patent looks when (and if) it comes out of the patent office, and it's hard to say when that could be - the average patent issuance wait is rapidly approaching 4 years for software. Expect it to be even longer for one that is likely to be as hotly disputed as this.

[Weekend Poll] Would You Like Some Stylus With Your Tablet, Sir?