The latest version of the Droid series, the Droid 4, definitely addresses those issues and more. It's the most powerful Droid that the world has ever seen - but that doesn't necessarily mean it's all good. I've spent the better part of a week with this device and it's time to lay it all on the table - is the Droid 4 the OG Droid reincarnated, or just another QWERTied flop by Motorola? 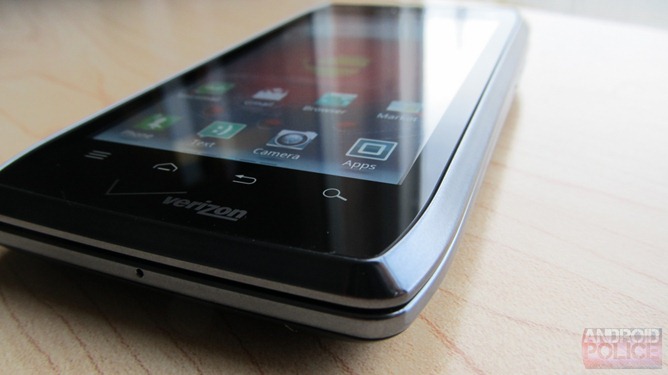 The Droid 4 packs some serious improvements over its predecessors, putting it nearly up to par with the current king of the Droid line, the Droid RAZR.

Sure, it's not too shabby on paper, but how about the execution? Here's a quick look at the good and the bad aspects of the D4. 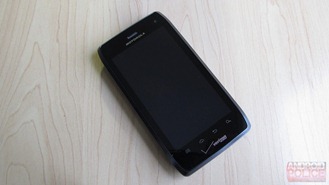 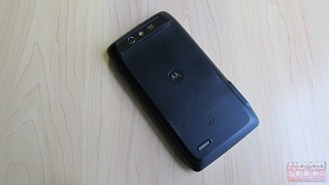 In A Sentence: The Droid 4 packs a fast processor, good battery life, and an excellent keyboard; unfortunately, it also has the worst display that I've ever seen on a smartphone.

You Should Buy It If:  If you just can't live without a physical QWERTY and want some of the latest hardware in a 4G LTE handset, then D4 is probably the best (if not the only) option. However, you'll have to learn to deal with an awful amount of ghosting from the display. 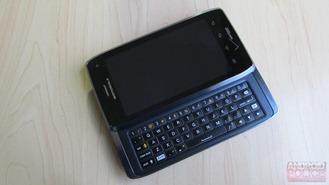 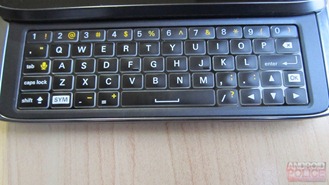 As I said in my initial impressions, this device is built like a tank - it's as solid as you could possibly want a device to be. Because of the keyboard, it does feel a bit bulky in-hand; in terms of size, though, it's actually quite thin given the slide-out QWERTY.

Speaking of, the keyboard on this device is nothing short of wonderful. It's a pleasure to type on, especially for those who are coming from another device with a physical keyboard. The edge-lit keys are a nice touch, making it very easy to type in a dimly-lit or dark room.

However, there are a few things I've found to be amiss with this keyboard. Firstly, there's no dedicated search button. This may not be a big deal to many, but back in the days when the OG Droid was my primary phone, I used the search key on the keyboard all the time. Sure, there's a search key in the capacitive row below the screen, but it's just convenient to have one on the keyboard. Also, the apostrophe is in an unusual position. It's only natural to go to the right side of any keyboard for this particular mark, but on the D4 it's actually on the left side (above the tab key). Again, not a huge deal, but a bit on the annoying side. I'm sure it's probably fine after you get used to it.

One thing that I would like to see incorporated into the keyboard is a spring-loaded mechanism. While sliding the keyboard out isn't difficult by any means, there's just something ever-so satisfying about barely pushing a screen bezel and watching it slide forward like a switchblade, exposing the keyboard. 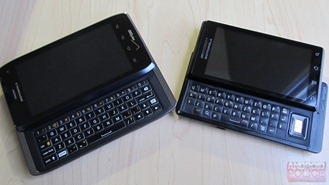 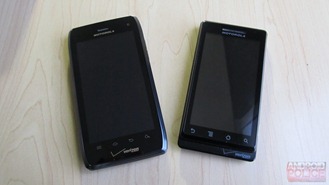 Those minor annoyances aside, however, the keyboard is rock solid and should fit the bill for anyone looking for the best physical keyboard they can get in an Android phone.

This is, without a doubt, the low point of the review. In my initial impressions, I said "I'll say this about the display: it's not awful." Having spent more time with the device, I'll take this opportunity to change my stance on that. This display is awful. The color reproduction isn't what it should be (though it's not as bad as the Droid X2). Still, whites aren't white and greens aren't green - it just doesn't look right. Then there's the issue of pixelation. It's very noticeable in the 3G icon, signal strength indicator, and battery icon in the navigation bar. It's actually akin to that of the X2; perhaps just a tad bit better. 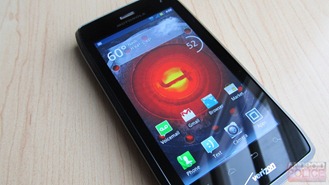 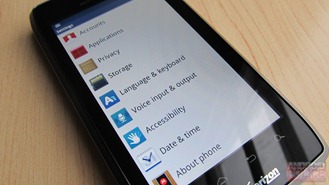 While both of the aforementioned issues are tolerable, the primary problem with the D4's display is ghosting. The X2 had similar problems, as did the Bionic. But, after comparing the displays on all three devices, both of those devices pale in comparison to the Droid 4. I'm not being pretentious, either - it's honestly that bad. The ghosting is enough to make anyone nauseated, especially when it's black text on a white background (read: the settings menu, many web pages, Facebook, Google +... you get the idea). It's a bit less noticeable with a dark background and light text, but it's still there. It's especially bad while slowly scrolling, so trying to skim over text is almost a no-go. While it's still present when quickly scrolling, it's not as noticeable since you're not actually trying to read the words. For a better idea of what I'm talking about, take a look at the video review.

Fortunately, the problem is really only evident while scrolling, so videos and games are largely unaffected.

With all of that said, some users may really not find the ghosting a huge deal. I, however, definitely did. My suggestion? Head over the local VZW store and give it a shot for yourself, but pay special attention to any scenario where you're looking at black text on a white background. You may find that you hate it as much as I do; on the other hand, you may find it tolerable.

As bad as the display is, it does bring one major selling point to the table: better battery life. When it comes to good battery life, the D4 has it in spades. I was able to use the device as my primary phone and easily make it through an entire day. That's playing music, a bit of surfing the web, playing games (Zenonia 4, to be exact), checking the social sites, and, of course, phone calls/texting. 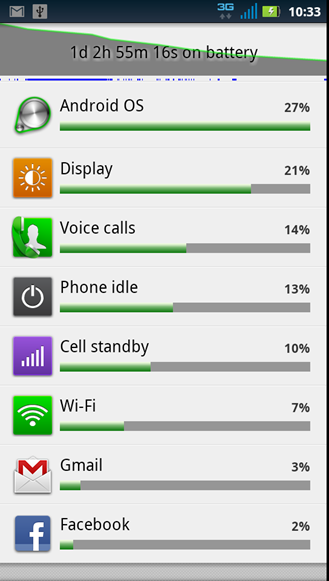 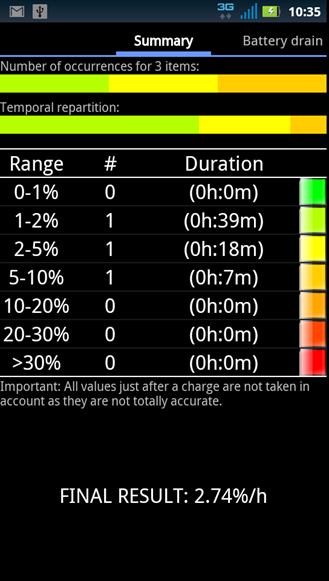 The above screenshot was taken with about two hours of display time and 30(ish) minutes of talk time, all without changing the default mobile network from CDMA/LTE. In short, I was seriously blown away by the D4's battery life - it could easily double that of my Galaxy Nexus. Thus, for anyone concerned with the non-removable battery - don't be.

I can sum the software up in one word: bloatware. Oh, and Blur, I guess. So, two words. While the latter isn't as important (because, let's face it - Blur is Blur is Blur, right?) the former is completely absurd. Here's a glimpse into what the four pages of apps hold right out of the box: 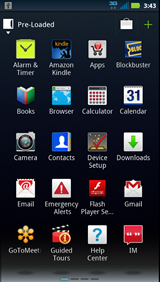 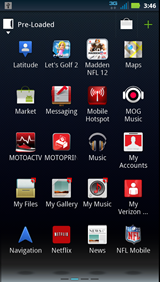 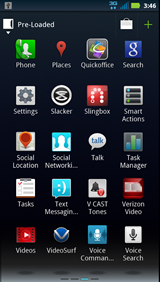 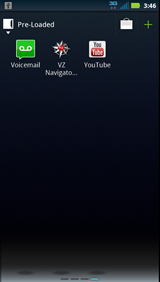 Yeah, 31 bloatware apps. Granted, some of those are Blur apps (about nine), but all the rest are VZW pre-loaded, uninstallable crap. Now we know how they got the price down to $199 with a two-year agreement. They subsidized the other $100 with more unwanted apps than any one person wants. Pathetic.

Despite the voluminous amount of bloatware plaguing the D4 out of the box, it still manages to run like a top. Thanks largely to its 1.2GHz OMAP processor, the Droid 4 consistently scored 2000+ in Quadrant (which is now optimized for multiple cores),  while Linpack pushed out a reasonable 44 .xx most of the time. Of course, benchmarks only paint part of the picture. Throughout my duration with the D4, I experienced no lag, slowdowns, or performance hits of any kind. Navigating between apps is snappy and responsive.

So, in a nutshell, there's too much bloatware, but it still performs wonderfully.

This is yet another area in which I was impressed with the D4's performance. Honestly, I didn't expect much from the camera, so when I saw the images it produced, I was pleasantly surprised. 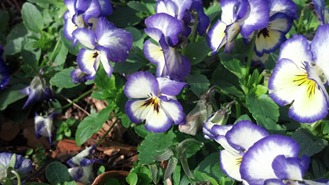 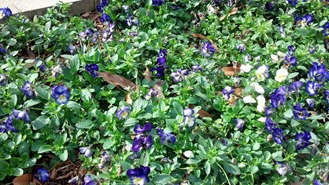 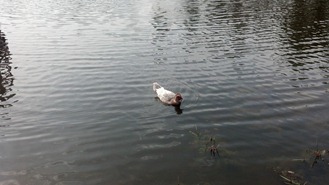 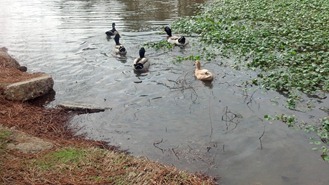 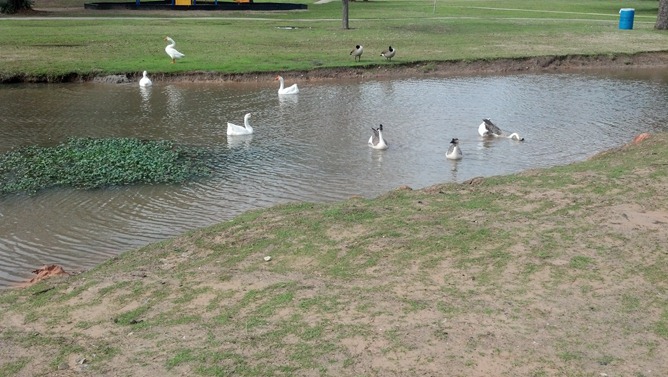 I've grown quite used to the instant response time of the camera on my Galaxy Nexus, so I'm pleased to say that the response time on the Droid 4 is almost just as fast.

Motorola has made some nice improvements to the stock camera software, as well. It can automatically apply specific effects to the images, such as sepia tones, various color tints, black and white, negative, and solarize. It also has a variety of scenes to choose from for taking specific pictures, including portrait, landscape, sport, night, sunset, macro, and low light - most of which I only wish my Nexus had.

It can also take panoramic photos, though the process is a bit on the cumbersome side. It's not as fluid as the default panoramic setting in Ice Cream Sandwich, but it's not as choppy as using something like Pano - it's somewhere in between the two. Aside from panoramic mode, it also has a really nice feature for taking several shots all in a row called mult-shot, which could come in handy for taking pictures at sporting events or the like.

Wft are they doing?

Like most other Motorola phones, the call quality is absolutely outstanding. The speaker is loud and crystal clear, and the mic is equally as excellent. In terms of using the D4 as a phone, you won't find a better solution anywhere.

Also like other Moto phones, it pulls in signal like a pro. While my Galaxy Nexus is sitting idly at -100 dBm, the Droid 4 has a modest signal stregth of -86dBm. That's not a one-time thing, either - those results were pretty consistent regardless of where I went, and often times even better. 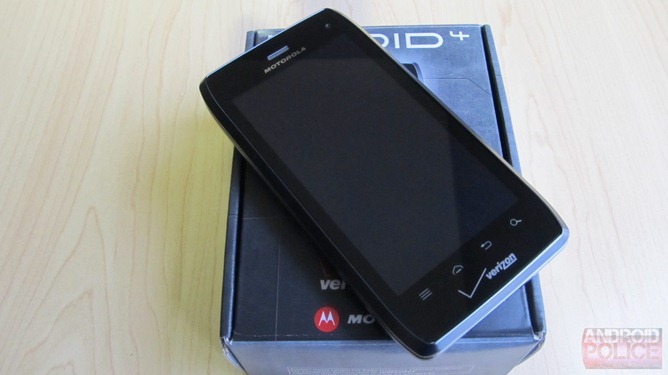 So, how does the Droid 4 stack up against the keyboard-packing Droids of old? It has a substantially better keyboard, a processor that packs a punch, and enough juice to get you through the day. It may not have the same impact on the market or the Android world that the OG Droid had, but, despite its less-than-spectacular screen, it's definitely the best Droid since the old fella retired.

If a keyboard, LTE, and good battery life are on your must-have list for a new device, then the Droid 4 is probably the best option out there. Unfortunately, you'll have to deal with a shoddy display and a crap-ton of bloatware (before you say it - I know that you can "root and remove" the crapware, but that's not a viable option for everyone) to get what you're after. If it sounds like a worthy trade-off to you, then I say go for it. If not, however, then there are much better solutions on the market right now.