Tablets are still trying to find their place in the world. Are they productivity tools, media consumption devices, or are they all-purpose, do-anything magic slabs with a bevy of sensors and radios allowing you to unlock the powers of the universe? Air Display leans more towards the latter, turning your tablet into a secondary touchscreen display for Windows or Mac.

The app works via WiFi, which means that not only can you save a scarce video-out port on your machine, but you can also use the display from anywhere within WiFi range. Unfortunately you can't use your tablet's own on-screen keyboard to interact with your apps but Air Display can send touch input to the Windows OS. Windows 7 includes some rudimentary touch features and if you don't have a touch screen display (read: most of you), this will give you a chance to try them out.

The input constraints, unfortunately, mean that Air Display will be best suited for secondary displays. Think of it as a heads-up display. Instead of alt-tabbing back and forth to see who's online when, or to check your stats/stocks/fantasy football/OCD numbers of choice, you can have all this information available at a glance. At least, that's the idea. 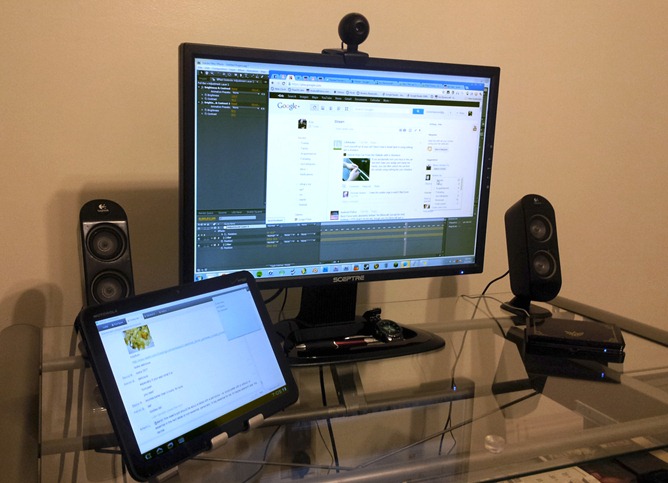 Unfortunately, the implementation isn't quite as reliable as one would hope for a $10 app. While I had no problem getting it to run on my Xoom, Cameron tested it out on an Acer A100 and a Transformer Prime and was unable to get the app to work properly on either. He was able to get it working on a Galaxy Tab 10.1, however. In both our cases, enabling Air Display immediately switches Windows into basic mode, disabling Aero and screwing up any custom themes (to be fair, the app's description tells you this in advance: "Aero and DirectX will be disabled while connected to Air Display, and re-enabled upon disconnection").

We reached out to Avatron regarding the issue getting the app to run on the Acer A100 and Transformer Prime. We were told that the CEO had been informed of the issue. Hopefully this means the problem will get fixed and the devices will be supported.

It's also worth noting that, since the display is being streamed via WiFi, the framerate on the second screen isn't great. Mouse movements and keyboard strokes aren't quite 1:1, but they work sufficiently for basic apps like chat programs. The secondary display would be great for apps you want to keep visible but rarely interact with, like a calendar, to-do list, or analytics window.

In addition to the trouble we had with half the tablets we tried it on, I also experienced some bugs once I turned the app off. Twice, after disabling Air Display, my desktop would no longer accept clicks from my mouse. I was able to move the cursor just fine, but clicking wouldn't work until I restarted the machine.

Currently, Air Display is a great concept, but a few too many bugs are making it difficult to recommend. We hope this will change with further updates, as nobody really quite cracked the second display problem just yet (but we really want them to).

Where To Get It

Air Display is only available on the Amazon Appstore at the moment, unfortunately. The primary disadvantage here is that you don't have a refund window. Amazon has been known to provide refunds if you contact them directly, so if you purchase the app and it doesn't work on your tablet, you might not be up the creek. Still, for an app that's this flaky about working properly, it's hard to describe paying $10 for it as anything but a gamble.

Then again, while Air Display may be a bit of a risk right now, we like the concept. And for what it's worth, I've been able to use it every day this week without any major problems besides the previously mentioned mouse issue. If you're feeling lucky, or don't mind playing around with software that's not quite perfect yet, go download the app. Otherwise, keep an eye on Air Display and wait 'til they get the kinks worked out.

Update: Air Display is now also in the Market:

[New Game] One Epic Game For Android Has Zombies, Guns, And Jetpacks, Lives Up To Its Name

Apple Receives Injunction Against Motorola In Germany For Slide Unlock - Will Have To Use ...