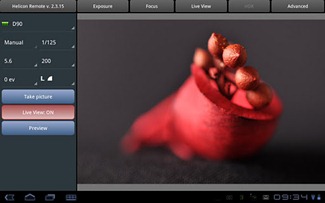 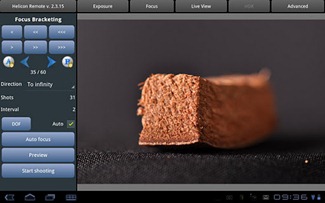 Helicon Remote boasts an impressive list of features, from advanced (read 15+ exposure) bracketing, to full screen live view, to time lapse shooting (which, unfortunately, isn't in the current beta). The app is compatible with the same list of Canon EOS devices as DSLR Controller, plus Nikon DSLRs including the D3/x, D300, D5000, D90, D700, and most later models.

As the description states, the app is currently in a beta stage, and the developers are looking for user feedback, compatibility confirmation, and general public testing. To sweeten the deal, "active beta testers" will be granted 50% off the app's price when the final product is released.

It's worth reiterating that the app requires Android 3.1+, as well as a USB host. If you're a Nikon user who's been yearning to control your camera from your Android-powered tablet, hit the market link below and start shooting.

[Review] Motorola DROID 4: An Incredible Device - If You Can Handle The Awful Screen