Rumors are flying left and right on the internet this morning about a potentially new tablet called the Galaxy Note 10.1 accidentally outed by Samsung in an invitation to its 'Developer Day' at Mobile World Congress. The Note moniker clearly suggests one feature that Sammy itself has already hinted at: the S-Pen. 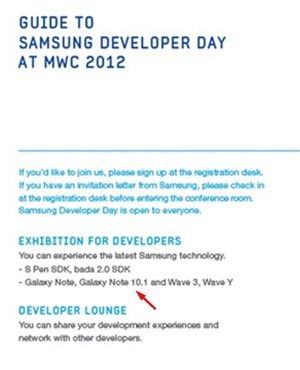 It was my initial reaction to write this off as a simple typo, but thanks to a bit of investigative work by The Verge, it appears that this device may indeed be legitimate. According to Google Cache, Samsung was recently on the hunt for a "teen student" to be a in a commercial where he would "use his Galaxy Note 10.1 to record, take pictures, [and] edit...", which, combined with all of the other evidence, all but confirms this potentially amazing device.

Unless, of course, someone in Sammy's PR department really dropped the ball. Twice.

A Samsung representative declined to comment. That pretty much says it all.