If you've ever used an Android tablet, then you probably know that they could really use some true multitasking functionality. Currently, we don't really have an option to do multiple things at once, and when we do try, it becomes cumbersome and annoying. Well, we can always count on our good friends from the CyanogenMod team to answer our pleas and requests for features that we likely wouldn't ever see otherwise. They recently posted on Google+ about integrating an intriguing Android extension called Cornerstone into CM9, and it looks beautiful. 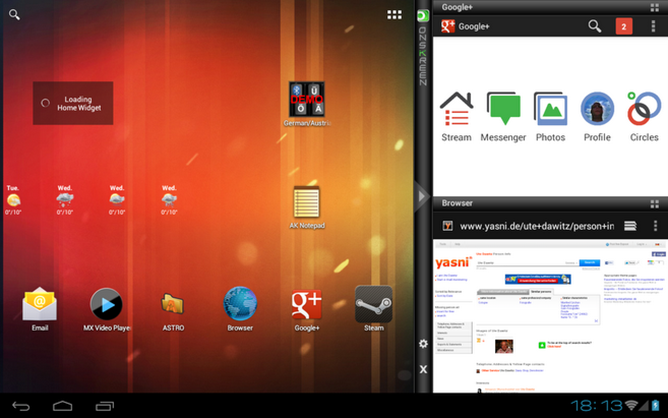 Cornerstone is an incredibly useful Android extension produced by Onskreen. Basically, it provides us with the type of multitasking that we should already have on tablets. It'll sit as a pull out bar on the side of your screen, and when you want to multitask it brings out two additional panels in which you can load applications. You can then interact with any of the panels you want.

Sounds phenomenal, doesn't it? Check out the video below to see it in action.

If you don't want to watch it again, go ahead and wipe that drool off your face.

CyanogenMod seems really interested in getting this to work, but it isn't a done deal yet. They want to make sure it runs smoothly and won't cause any future issues, so it is currently only experimental. I really hope they get this into CM9, because then we'll be able to get so much more out of our tablets.

You'll be glad to know that Cornerstone is completely open source. If you're interested in playing around with it before we see it in CM9 builds, you can head on over to the Onskreen website and check out the source code. They plan on keeping their Wiki updated with user built ROMs as they become available for other devices. Currently, they have one ready to go for the Wi-Fi Xoom. Maybe we'll see more pop up after the Android community has had a bit of time to toy around with the source code.

On a related note, Steve Kondik (Cyanogen) posted on G+ that he's currently running it on his Tab 10.1 and he "looks forward to having it in CM9." Sounds promising!

[Updated: Here Are The Winners!] Giveaway: Keep Your Device As Safe As Possible With ...