Powow: Text Messaging is an alternative messaging app made by Handmark, the company that produced One Louder Apps. Now, I know that you're thinking about all of the other messaging apps on the Market and want to know what makes this one special. The fact of the matter is that only a small percentage of the endless waves of similar apps are worth using, and despite missing a couple key features, Powow is one of few I would consider fully committing to.

As I mentioned before, this app does miss a few key features, but we'll get to that later. Let's first talk about what Powow does right, and why it could be worth the switch from the stock messaging app or from other alternatives.

In my opinion, one of the coolest features has to be Zip It. If you use other apps made by Handmark subsidiary OneLouder Apps, then you may be familiar with this feature already. It has slightly different functionality in this app than others, but shares the same concept across them all - getting something to shut up or disappear.

In Powow, the Zip It feature gives you one of three options to choose from: 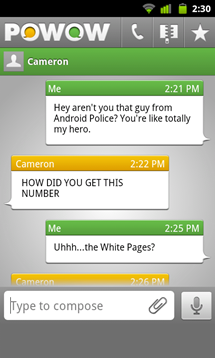 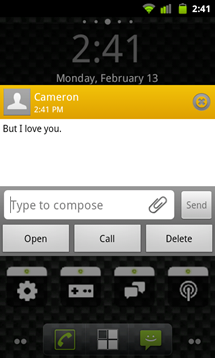 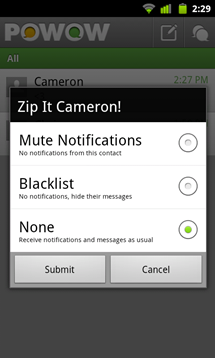 Speaking of the Zipped tab, there are two other tabs that you can use to categorize your contacts and message threads. Basically, if you apply a Zip It status to a contact, they'll appear in the Zipped Tab. You can add particular contacts to the Favorites tab, and can view both favorite contacts and normal contacts in the All tab.

Like many other messaging apps on the market, this one includes a popup notification feature. In most others, I noticed that the popup would take significantly longer to appear than a regular status bar notification. Which really annoyed me and usually ended up being a deciding factor when moving back the stock messaging app. However, with Powow this simply is not the case. The popup notification appears just as quickly as the status bar notification, enabling me to quickly respond without having to leave the app I'm currently in. Additionally, you can open the app, call the person messaging you, or delete the message all from the popup. Naturally, you can disable this feature if you don't want to use it. 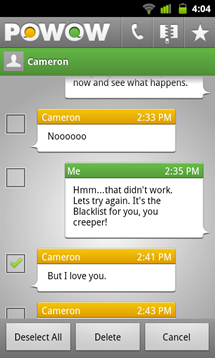 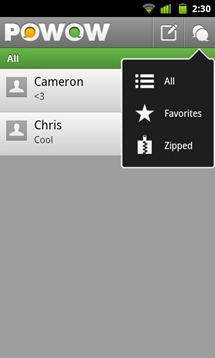 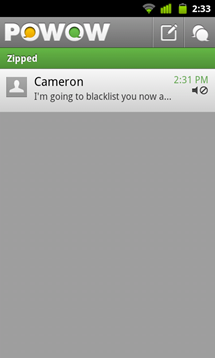 A few more lesser important features (to me) are voice text input powered by Google's voice input technology, call shortcuts that allow you to call contacts through Powow (which should be included in all messaging apps), and a homescreen widget that shows you your last 20 messages. I find the widget to be completely useless, though, because it doesn't do anything more than a notification would.

Before I go any further, the features and functionality this app already has greatly outweighs what it's missing, and the missing bits definitely don't make me want to quit using the app. However, if everything was perfect I would enjoy using it much more.

First off, the biggest issue is the inability to opt out of ads (you can't see them in the images above because they disappeared when my phone took the screenshot). I understand that the developer needs monetary compensation to continue developing superb apps, but if there is one place I don't want to see ads it's definitely my messaging interface. I would gladly pay to buy an ad-free version of this app, but it isn't available. Hopefully we'll see one soon.

My second and final complaint is the lack of themes or customizable layouts. I wouldn't really care about a feature like this if Handmark didn't make such bold color choices with the app's UI. Everything else looks clean, well-made, and sleek, but the color scheme just doesn't work for me. Some of you may think it looks nice, but I'm very adamant about how my phone looks and would like the option to make this app fit in with how the rest of my phone is themed.

Well, there you have it. Obviously Powow makes up for what it's lacking with some other killer features. What's great is that these minor issues have nothing to do with functionality and can easily be fixed. Would I use this app over the stock messenger? Yes. I also think that it is definitely one of the top alternative options on the Market. That green and orange color scheme is killing me, though.

Check it out and let us know what you think below.

Two Down, One To Go: U.S. Approves Google-Motorola Deal