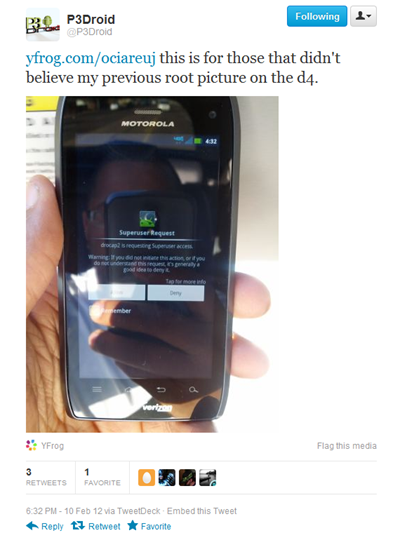 Unlike the mod efforts in search of predetermined bounties we've seen in the past, Rosenberg is asking that a $500 bounty be raised after the fact, and explains that it is being raised for a good cause. According to Rosenberg, the first $200 collected will go toward buying a Droid 4, while the remainder will be donated to the American Red Cross.

This certainly puts a refreshing philanthropic twist on Android development and security research, and is a commendable move on Rosenberg's part. If you'd like to donate to the cause, just click through to We Pay. Of course we'll keep you up to date on the exploits when they are released.

Via My Droid World

T-Mobile Samsung Vibrant Returns To The List Of Supported CyanogenMod Devices As The Emergency ...

[The Cake Is Not A Lie] Proof-Of-Concept Build Of Portal (Yes, That Portal) For Android ...