Google just dropped an update to its social networking app for mobile. Unlike some other apps, Google's brought a ton of new features that are actually useful. The Stream is now faster, doesn't immediately jump to the top of the feed when the app automatically refreshes, and shortens entries so you can see more of them at once. 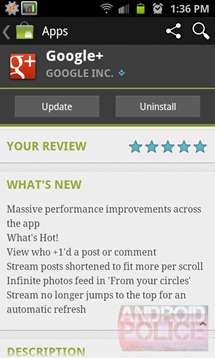 A few other improvements have been made. A new What's Hot! section allows you to follow what everyone is talking about, in an obvious attempt to compete with Twitter's trending topics. You can also see who +1'd a post or comment. Unfortunately, Google still hasn't brought a proper tablet interface to Google+ yet, leaving it in the company of many of Google's other apps that can't quite keep up with their own style guidelines. Still, reading Google+ updates should be tons more enjoyable now.

The update is currently rolling out on the Android Market. Some of us are still waiting for it to hit our devices, so if you don't see it yet, just be patient.

[Updated: Here Are The Winners!] V-Day Giveaway #1: Show Your Valentine That You Care With An ...