Yes, project Majel, a "highly advanced artificial intelligence robot" that has the potential of turning Voice Actions into our own pocketable J.A.R.V.I.S. could very well be part of it too.

Today, we might find out what Google X is all about. Maybe. Depends on how much they want to reveal.

Interestingly, wesolveforx.com simply embeds an iframe containing http://www.thinkbelieveact.com/solveforx/, which isn't registered by Google but rather

TBA Global is apparently a marketing agency that's probably helping Google set up what you're about to read.

Solve For <x> is in my opinion undoubtedly related to Google X and is going to be a conference or a series of talks likely similar to TED - just check out the description:

WELCOME TO SOLVE FOR X

This combination of things - a huge problem to solve, a radical solution for solving it, and the breakthrough technology to make it happen - is the essence of a moonshot.

Solve for X is intended to be a forum to encourage and amplify technology-based moonshot thinking and teamwork.

And we can't wait to hear it.

After digging around the site a bit, I pulled the background image that is currently covered up by an annoying overlay - here it is:

Update: @Marlamin discovered another image with instructions for presenters. 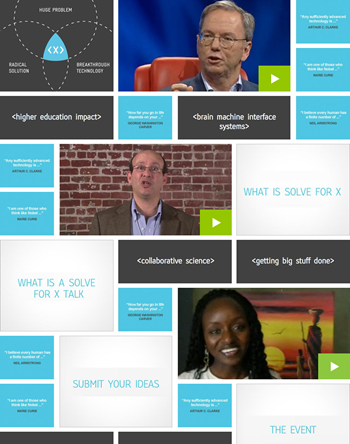 The corresponding YouTube channel went live as well. It contains one video at the moment:

And then we have Mr. Richard DeVaul with probably the most intriguing job title I've ever heard - Rapid Evaluator. Oh, and he works for Google (and formerly as Senior Prototype Scientist at Apple).

Why is he so interesting? Because it seems that Richard here is attending the "solve for x" conference that is already going on right now. It is apparently full of highly interesting topics, which we're about to hear about and see with our own eyes:

The "solve for x" YouTube channel and web site with all presentations will be up by Monday.

Yeah, that would be this channel. It's currently missing the "all presentations" part, but hey - Monday is only 2 hours old in Mountain View.

Here's what Richard had to say:

The conference is driven by short, technology rich presentations on topics ranging from low-energy, low-cost water desalinization to stretchable silicon biosensors. This stuff is real.

I and other attendees have been tweeting under the #solveforx tag. Check it out.

The "solve for x" conference continues to be really interesting. Today we have had talks on transforming education, 5x improvements in agriculture through better decision support, synthetic biology and carbon-negative biofuels.

The "solve for x" YouTube channel and web site with all presentations will be up by Monday.

The #solveforx conference videos are supposed to be up this afternoon at wesolveforx.com

As if that's not enough, 9to5google managed to dig up a photo of the event's logo: 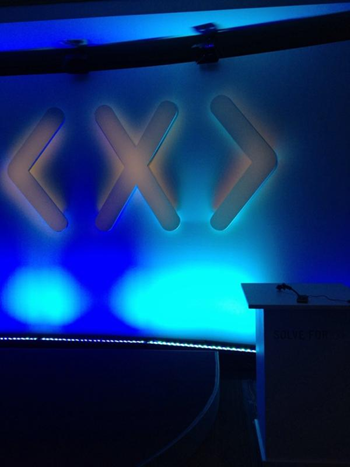 Don't forget to fill out the form on the X site to find out when it goes live:

It's probably a good idea to also save the #solveforx search and subscribe to it on Twitter and Google+.

Yeah, today is going to be one exciting Monday by the looks of it. Stay tuned, folks.

Update: The first videos went live in the YouTube channel. Unfortunately (and kind of expected at this stage), none of them are about Majel (yet).

Source: 9to5google, thanks for the tip, @wiineeth!