When last we checked—mere minutes ago—ICS 4.0.4 source code hadn't been released to the public. Which is why we were surprised to learn that 4.0.4 was available unofficially for the Nexus S 4G. Today, the mysterious Android version that's forcing me to resist a "page not found" joke is showing up in a few forums, this time for the Galaxy Nexus.

Update #1 from Cam: After spending a bit of time with this update, one thing is for sure: it's stupid fast. The camera launches almost immediately now, even from the lockscreen - an area in which is used to crawl. Everything just seems even more fluid than before. The new radio also seem to be doing some good for signal strength - my phone appears to have jumped from the -120 to -100 dB range up to -90ish. That's all I've found so far, but I'll make sure to drop in another update if anything major pops up. 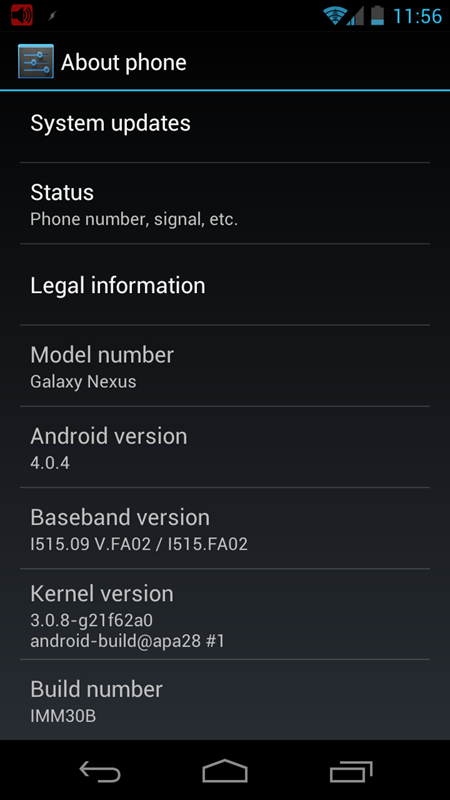 Users on several forums are saying they've received prompts to download and install new updates that crank the version number up to 4.0.4. This new version appears to include new radios, so hopefully reception will improve. We're also hearing that it includes a fix for the Android OS bug that has been keeping the device awake for now good reason. Unfortunately, we don't have any release notes to confirm any of this.

If you're feeling lucky and want to try out some software that, according to Google, doesn't exist yet (look who I'm talking to, of course you do), you can download the file (659e0a8f24b4.signed-mysid-IMM30B-from-ICL53F.659e0a8f.zip) below:

According to an XDA senior member:

As always, though, you're responsible for what happens to your device when flashing any software, so be careful and backup before you do anything.

[Weekend Poll] Are You Using A Custom Launcher?