Today, Lookout, a mobile security company, released a new Android application that can help figure out just where those pesky notification ads are suddenly coming from and offer you ways to opt out of them or get rid of the culprits altogether.

There are other detectors of notification ads on the Market, but none are as comprehensive and polished as Push Ad Detector. No surprises there - Lookout is known for quality of its software.

Once you perform a scan, you will see a list of installed applications that include support for ad networks mentioned above as well as ways to either opt out of those networks permanently (presumably based on device ID), get more information, or just uninstall the offenders altogether. 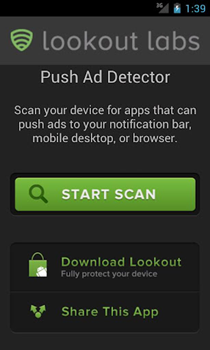 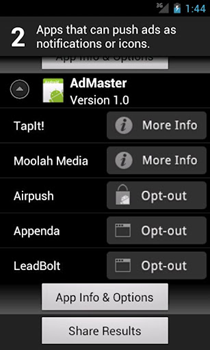 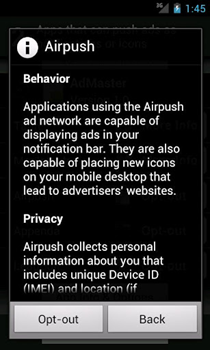 Alternatively, if you don't have any apps that can push notification ads installed (good job if this is you), you will see this: 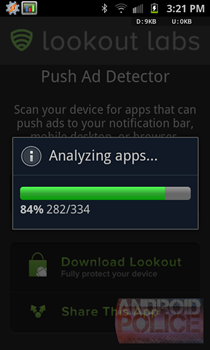 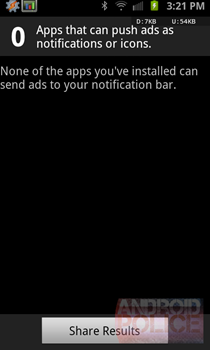 So, next time you download a bunch of stuff from the Market and get a rogue notification ad, don't freak out - download Push Ad Detector instead.

We've heard directly from our users that push ads can be frustrating and annoying. These ad networks are integrated into apps, but because the ads are displayed outside an app, it's very difficult to find out exactly which app is enabling these ads. We've designed Push Ad Detector so users can make informed decisions about what apps and ad networks to keep on their phones.

Push Ad Detector also shows users exactly what personal data is being collected by these ad networks, and if it is being done so securely.

At this time, Push Ad Detector does not detect the presence of all mobile ad networks. The six ad networks that are detected use the most aggressive push ad techniques.

Push Ad Detector identifies if any of these aggressive ad networks are integrated into an app. It does not determine whether the app is actively using the push advertising techniques available to it. For example, an app developer may integrate a network into an app without actually pushing ad-enabled icons to the mobile desktop. In these cases, Push Ad Detector will still report the presence of the ad network.

Lookout Labs has investigated the capabilities and personal information collection methods specific to each ad network. Personal data is gathered so advertisers can show you relevant ads and track results of ad campaigns. There are a number of best practices for secure data collection, such as using hashing to obfuscate data. Push Ad Detector will show you exactly what personal information is collected, and if it is collected securely.

When possible, Push Ad Detector shows a link to opt out of an ad network. When you tap on this link, you will be directed to the ad network's public opt-out path, which may be a webpage or a mobile app. When an opt-out path is not publicly available, the only way to eliminate a network's ads is to uninstall the application. Note: Push Ad Detector does not track the status of your opt-out request, so the opt-out link will still be shown for all detected instances of an ad network.

This application does not remove individual applications or ads from your device. When an app is detected that has an agressive ad network, Push Ad Detector provides a shortcut to the Application Details page. On this page, tap "uninstall" to remove the app manually.