Augmented reality has spent years in the "great idea, not quite there yet" bin, right next to motion controlled TVs and self-driving cars. Of course, what's the best way to improve a fledgling technology? Stick a trigger on it and let people shoot things with it. The Xappr is here to bring that essential step to the evolution of AR technology. 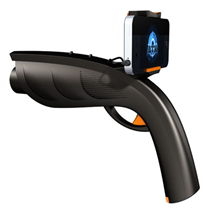 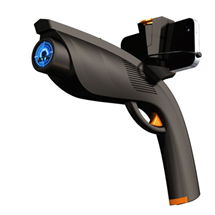 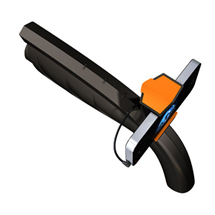 The Xappr gun, developed by game studio MetalCompass, is an attachment for your phone designed for first-person shooter games. Games like ATK, also developed by MetalCompass. This "social real-world" game allows players to engage in virtual shootouts with each other in real life. The Xappr accessory makes playing those games feel like playing a game, instead of like taking cell phone photos in a warzone.

There's also single-player games available, in case you don't have a surplus of friends who own smartphones, have a fondness for laser tag, and have $45 to spare on a gaming peripheral. If that's your situation, though, may we suggest finding better friends?

The Xappr is designed to support AR games from other developers as well, so not all games are available on Android just yet. Some of the Xappr-compatible games are only available on the iPhone at the moment. It's up to developers to make their AR games compatible with the device, so expect some to hit the Market sooner than others. Rest easy knowing that AR Invaders, at the very least, is already on the Market and ready for the shooter once it ships.

[Hands-On] Cartoon Wars By Gamevil Is A Great Time-Killer, Nothing More