Update #2: According to Koush, the newest ROM Manager update that is being rolled out now has a new option to download ClockworkMod Touch for supported devices as an in-app purchase (or for free at http://www.clockworkmod.com/rommanager). 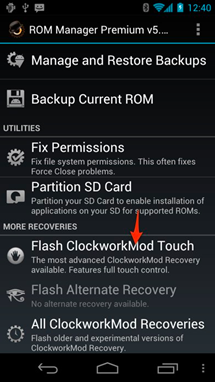 It's worth noting that (for now) the beta is only available for the Nexus S' GSM variant (Update: NS4G now too), and for both CDMA and GSM versions of Samsung's Galaxy Nexus. As noted in CWM's Google+ post, users should flash the new touch recovery beta using fastboot.

Though the beta is only available for a select few devices, an official touch interface for CWM should save your physical buttons from abuse, ease the process of tweaking your device, and make one of the most popular recovery options for Android that much sweeter.