Are you one of literally dozens of users who believe that your 4.5" smartphone is too small, that 7" tablets are too big, and that styluses never got the shot they deserve on a modern smartphone? Then mark February 19th on your calendars, friends. The Galaxy Note from Samsung is landing that very day (pre-orders start on February 5th). 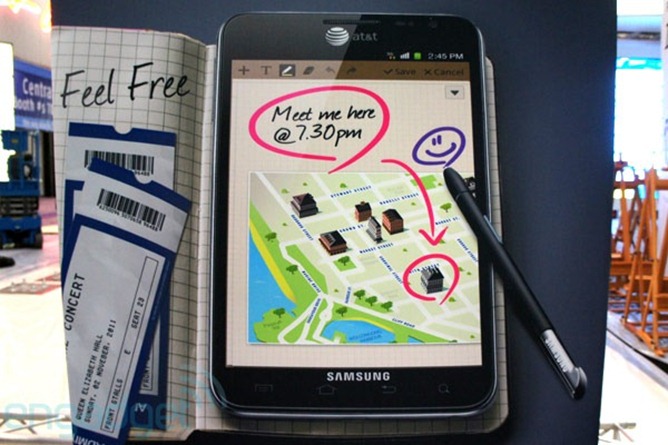 The Galaxy Note is unique enough in its own right. Part phone, part tablet, the device attempts to be it all for the power user who can't quite decide which device they want. For what it's worth, the stylus looks to be one of the best attempts at integrating writing with the familiar touchscreen.

If you were looking at the Note as your next phablet purchase, however, be sure to check the data plans. According to AT&T, the device "requires a new 2-year wireless agreement with voice (min $39.99/mo) and min monthly data plan ($20/mo)." While it's likely you'll be able to buy the device off-contract for the unsubsidized price, it's unclear if AT&T will allow users to sign up for a data-only plan.

Create, capture and share in new ways with the samsung galaxy note, available from at&t feb. 19

· Customers excited to get their hands on this dream device even earlier can pre-order at http://www.att.com/galaxynote

or any AT&T company-owned retail store beginning Sunday, Feb. 5 for delivery by Feb. 17.

and advanced technology in the S Pen™ -- delivering an all-in-one device that allows users to work more efficiently and maintain productivity, while communicating in a unique, personal way.

· Galaxy Note boasts the world’s first 5.3-inch HD Super AMOLED™ screen (1280x800), one of the largest screens on a smartphone

, for sharp, clear colors and readability – both indoors and out.  With the expansive high-resolution screen that provides an immersive viewing experience, customers can take full advantage of the large display, to create and consume more.

· The Galaxy Note includes a highly advanced tool called the S Pen, which delivers fast, responsive and precise control to create fine lines and detail on the device display, much like an ink pen and pad of paper.  With the S Pen, users can easily sketch drawings, jot down notes, or write emails and texts quickly and easily in free-form handwriting.

designed to capture all forms of user-created content captured by the S Pen, allows for pictures, voice recordings, typed text, handwritten notes or drawings to be combined via a single application, converted to a ‘memo’, and shared as desired.

· It also includes a smart professional planning tool that makes full use of the device’s large screen. The calendar integrates the phone’s to-do list and schedule; control and navigation is intuitive, helping customers comprehensively organize their lives.

· An easy screen-capture function also allows users to instantly save any screen, which can also be annotated with the S Pen before being saved or shared.

· Users can communicate in personal, creative ways expanding beyond traditional sharing methods with the Galaxy Note.

The Galaxy Note features a unique portfolio of custom designed optional accessories including:

· Galaxy Note S Pen Holder Kit which offers a solution for users in need of a more traditional writing instrument. With a spare S Pen included, the S Pen Holder secures the navigation tool inside and offers a comfortable grip and allows for more detailed use.

Beginning Sunday, Feb. 5 customers will have the option to pre-order the Note at http://www.att.comgalaxynote

or by visiting an AT&T company-owned retail store.  Pre-orders processed by Feb. 15 will arrive by Feb. 17 at customers’ homes.