Motorola announced today through its official community blog that a RAZR "Developer Edition" (evidently based on the original Droid RAZR, not its newer MAXX counterpart) is in the works. The dev-friendly device will carry an unlockable bootloader and is poised to hit European markets relatively soon, with a (yet unspecified) unlockable device bound for the U.S. "in the coming months." Oddly enough, the blog post was pulled (perhaps it was published prematurely; Update: it's live once again), but luckily the text of the post has been retained: 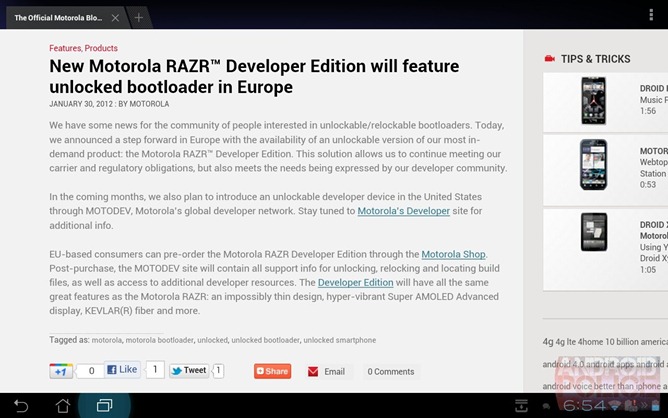 We have some news for the community of people interested in unlockable/relockable bootloaders. Today, we announced a step forward in Europe with the availability of an unlockable version of our most in-demand product: the Motorola RAZR™ Developer Edition. This solution allows us to continue meeting our carrier and regulatory obligations, but also meets the needs being expressed by our developer community.

In the coming months, we also plan to introduce an unlockable developer device in the United States through MOTODEV, Motorola’s global developer network. Stay tuned to Motorola’s Developer site for additional info.

EU-based consumers can pre-order the Motorola RAZR Developer Edition through the Motorola Shop. Post-purchase, the MOTODEV site will contain all support info for unlocking, relocking and locating build files, as well as access to additional developer resources. The Developer Edition will have all the same great features as the Motorola RAZR: an impossibly thin design, hyper-vibrant Super AMOLED Advanced display, KEVLAR(R) fiber and more.

The preorder page is expected to go live here, though no exact date has yet been divulged. For those who pick up a dev-friendly RAZR, information regarding the unlocking (and relocking) process, as well as other developer resources will be available at Motorola's MOTODEV site.

Update: The pre-order page is now up. While we understand the need for the warranty statement (i.e. there isn't any), what about hardware defects, DOA, etc? It doesn't seem like a very fair trade at all, does it? 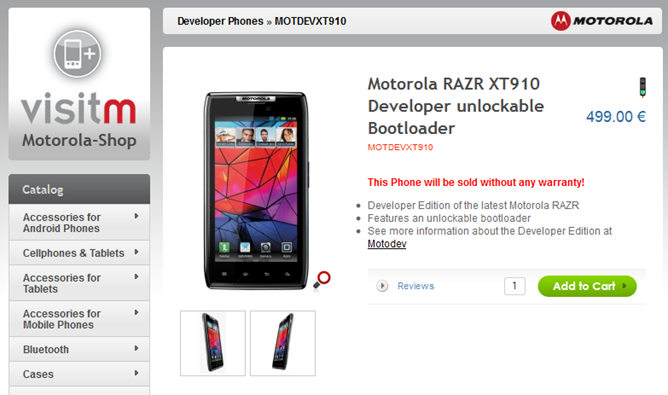 [Weekend Poll] Do You Use Live Wallpapers?