Yesterday Steam launched its brand new app for Android. Unfortunately, the app is still in closed beta and many users are waiting with bated breath for their invites to show up. If you're among the unwashed masses waiting for your golden ticket, we’ve got you covered. Don’t worry, though. You're not missing out on too much.

Let's get the obvious out of the way first: you won't be playing any games with this app. While users might hope for an OnLive-type setup that allows players to stream games over a network, Steam is still a ways off from that type of infrastructure. Here's what you do get:

It's not a bad start for a companion app. Unfortunately, the app still lacks a few basic features one might expect (like achievement tracking), and the features it does have are scattershot. This might be due to being an early beta, but time will tell.

At the moment, the Steam app has two really strong points. The first is community. Steam has had a built-in chat system for a while now, which connects players both in and outside the game. Now, users can chat while mobile. It's not a huge breakthrough in technological achievement, but it is nice to be able to keep one's gaming buddies separate from a regular contacts list. 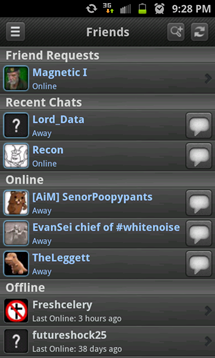 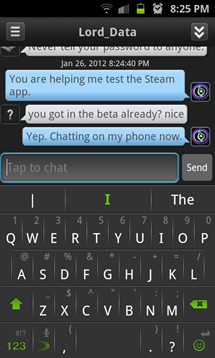 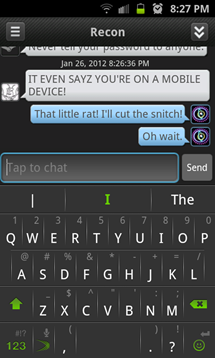 For every upside in this app, there seem to be two downsides. Chatting with friends is a breeze. Browsing their profiles, however, is less rewarding. You're able to see your friends' profile info, wishlists, etc., but game stats and achievements aren't available. Tapping a game that a friend plays takes you to the listing for that game in the Steam store.

Groups are similarly limited. You're able to browse around to different groups, read descriptions and comments, but making comments isn't possible yet. If you depend on groups for important updates, you'll receive them. If you go to groups to engage with your friends, you'll have to sit this party out. For now.

Shut Up And Take My Money

The other big area that the Steam Android app excels at should come as no surprise: the store. If there's one thing Valve and friends are great at, it's coaxing your hard-earned cash out of your wallet with their sales. Missing those sales can be a bummer for an avid gamer on a budget. 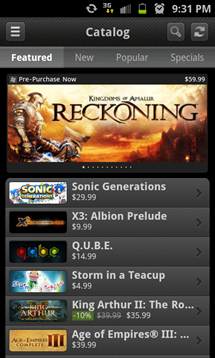 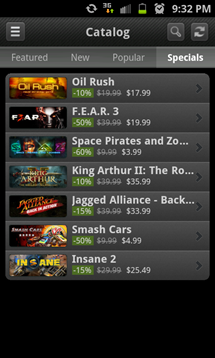 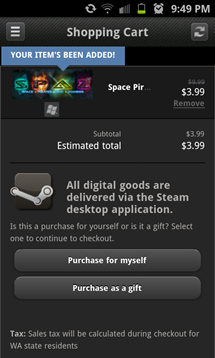 The mobile store is just as easy to buy from as the Steam client proper. There's a special section for current specials, tapping any game will take you to the game's page with info about the game, and the purchasing process is nearly identical to buying on a desktop. The app even remembers your payment info.

In keeping with the roller coaster of expectations we've been on so far, though, the store still disappoints on some fronts. For starters, while you'll be notified on a game's page if you already own it, there's no central library to see the games you've purchased. You're also unable to remotely install games; while obviously you can't install the games on your phone, it would be nice if you could see a list of devices connected to your Steam account and choose to install the games to whichever computer you choose. Given that you'll be purchasing games on the go, it feels like wasted time waiting to install them until you get to a proper gaming machine.

A Word On The UI

Ugh. That about sums it up. While the interface isn't exactly ugly per se, it's yet another example of an iPhone UI copy/pasted into an Android app. While iPhone UI design isn't exactly known for being bad, it is also not consistent with Android UI styles. In times past this made some sense, but with a well-documented Android style guide freely available, it's hard to sympathize with app developers who make this choice. 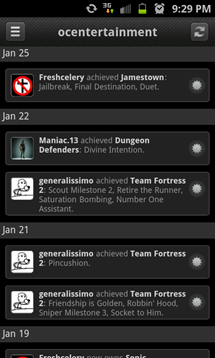 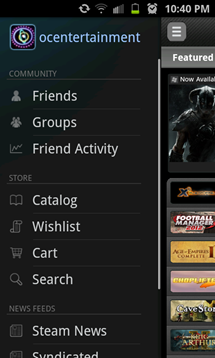 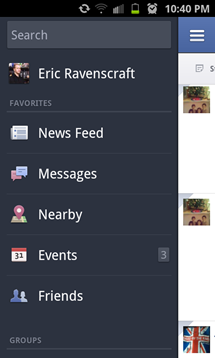 In addition to the iOS-esque elements, the app also has one major element pulled from the Facebook app: the sidebar. Accessible from just about anywhere, tap the menu icon (or the dearly departed menu button) and the sidebar will slide out from the left side of the screen. The menu bears more than a striking resemblance to the Facebook app.

To be fair, these aren't bad design elements to take inspiration from. They're just not Android. Apps are certainly free to express their own individual style, but when an app chooses to ape another's style, it at least fits better when that style fits with the OS it's on. Not to mention that despite the iPhone 4 having a higher resolution than the Epic 4G Touch I tested it on, the UI elements looked blurry and pixelated.

The Steam app still has a ways to go before it's fully-featured. There's plenty that the app doesn't do that it could or should. The things it does do, however, it does well. If you've got a pressing need to chat with your Steam friends and buy cheap games while away, this will do you just fine. It's not the mobile control center for your Steam life that it could be yet, though. RIM's New CEO Says Android Devices Are "All The Same," We Beg To Differ - With Giant Comparison ...