While it seems like the entire world has been looking at ASUS regarding the Transformer Prime's GPS issues, there has been another device plagued with GPS problems that seemed to somehow remain under-the-radar (bad GPS pun, I know): the Epic 4G Touch. A quick search of the internet will reveal dozens of threads across various forums where users are discussing (read: really pissed off about) the E4GT's lack of usable GPS. For example, here's one where someone is trying to figure out how to get their E4GT to hold a GPS signal. Here's another where the user has to use a different phone specifically for GPS. And another. And another. And another.

You get the point.

Update by Artem: Here's a sample of my GPS outside, after doing an aGPS reset and even downloading assist data. Right after I took the screenshot, the number of satellites dropped down to 2, and none of them were locked. The phone is freshly rebooted too.

Clarification by Artem: What we're talking about here is locking to a reliable GPS signal, meaning your GPS icon in the notification bar is solid and not blinking. Curiously, just using the GMaps app doesn't require a solid lock because there are other ways of pinpointing your current location on the map (cellular + Wi-Fi). However, to use Navigation, you need a solid lock, which is what the Epic Touch is so pathetic at. 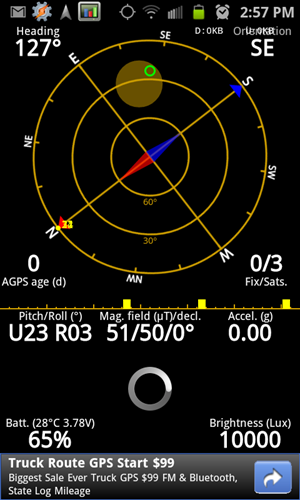 With each and every update users are hoping for an improvement to the GPS function on the device. OTAs have come and gone, and guess what? GPS still sucks. It just doesn't work. Our own fearless leader is at his wits' end dealing with the malfunctioning GPS reception, random lockups whilst using navigations, and so forth.

To get a better idea of how widespread this issue is, we turn to you and ask "Is your E4GT suffering from craptastic GPS performance?" Hit the poll below and help us get to the bottom of this. With enough noise, maybe Samsung/Sprint will actually acknowledge what's going on.

Please only vote if you have an Epic 4G Touch.

RIM's New CEO Says Android Devices Are "All The Same," We Beg To Differ - With Giant Comparison ...

[Updated: Here Are The Winners!] Book Giveaway #13: Kick Your Developing Game Up A Notch: We're ...