There was the BlackBerry Torch - RIM's attempt to be "hip" and "cool" and get on board with that whole full-sized touchscreen business they had sworn off after the well-intentioned failure that was the BlackBerry Storm. And who will ever forget the PlayBook - a BlackBerry device that didn't have email or sync support out of the box unless it was "bridged" to your other BlackBerry device. And now, the company has put the brakes on the first devices to run its next version of the BlackBerry OS (BB OS 10). It really is like watching a Shakespearean tragedy unfold. And don't worry, there's still time to grab some popcorn - it's likely that RIM's death will be more prolonged than the director's cut of a Peter Jackson film.

But doubt not the truth of that statement, RIM is definitely dying: 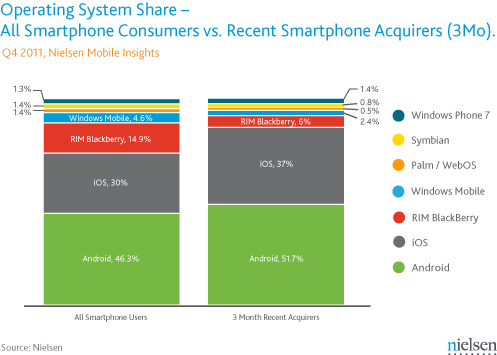 Talk all you want of "international markets" and "the big picture," but don't expect anyone to take you seriously anymore if you're still rooting for the guys on the RIM bench. This is nothing short of a technological and managerial train-wreck, and someone at RIM needs to pull the brake lever before this Canadian locomotive completely derails itself.

Even sometimes-BlackBerry-optimists BGR have taken to cynicism, particularly after the internal organizational shake-up that seems to be little more than a move to appease upset investors and generate talk of "change" in the press.

The point I'm getting at? Without anything short of a massive shift in strategy and product development, RIM is doomed. So, now that I've painted this wonderfully dreary picture, it's time to move on to what can be done to fix it.

How Android Can Save RIM

Let's just start with this: the PlayBook OS 2.0 Android app player is just not going to be RIM's way back to a meal ticket. Anyone saying otherwise probably still uses a BlackBerry, and when they hear the word "tablet," think of their cholesterol medication first, some holy stones with words on them second, and portable touch display computing devices third (if at all).

It's not that the app player is in and of itself a bad idea, it's just not a good enough one to save a product that has otherwise been a financial failure for the company. Selling off your inventory at $300 below MSRP to get some units off the balance sheet before the new year starts doesn't exactly scream "confidence," either.

But, like some crazed mountaineer scaling Everest, RIM isn't going to give up until some of its more important limbs start falling off. And that might not actually be the worst thing in the world for the company, because it's in dire need of a reality check. It's clear RIM's management has deluded itself into believing it can make products consumers actually want while changing its core strategy as little as possible. Any rational, informed person can see this just isn't going to work. The way I see it, BlackBerry has three options at this point:

First, it can go for broke and continue on the path to destruction. Iterate handsets, push the QNX-based BlackBerry OS 10, hope the Android app player idea takes off with developers, and basically keep doing what they've been doing from day one. Of course, it's extremely likely that this road dead ends after a few years, with RIM being sold off piecemeal as patents and office supplies.

Second, it can abandon its hardware business, sell it off, and become a software company. This doesn't sound like a horrible idea, but RIM would obviously have to shrink significantly to make this happen, and it would all but spell the end of BlackBerry OS devices in the mobile ecosystem. Licensing the OS to handset makers sounds like an attractive option in this scenario - if you don't think about it for more than 30 seconds. BB OS has a taint on it that only BlackBerry can scrub away, because they're the only ones with any confidence in their product anymore. It's the same reason Web OS going open source won't do anything but put it on life support - it'll be alive, but only in the strictest sense of the word.

Third (this would be the option I'm suggesting could save them), kill BlackBerry OS while they have the chance, and start working on integrating their existing software and products into Android. Real access to an app infrastructure, not simply giving developers an open door to compatibility, combined with Android's increasing polish and performance, would be like sticking RIM with a syringe of epinephrine straight to the heart. RIM could integrate its products like Messenger, its sync services, and highly recognizable and generally lauded QWERTY hardware into a platform that isn't headed for the ditch. Candy-bar keyboard smartphones are a market just waiting to be exploited in the Android device ecosystem, and if anyone does that form factor right, it's RIM.

Of course, this option absolutely terrifies RIM's management and investors. RIM has invested huge amounts of time and money into BB OS 10, and it still isn't ready. With the latest delay, it's clear that even when it is ready, the newest version of Android and iOS (and probably Windows Phone 7, too) will outmatch it in almost every way that isn't inextricably linked to a proprietary RIM product or service. No one is expecting RIM to reinvent the wheel with BB OS 10, and nothing short of that will renew the interest of fickle consumers in RIM's products. Even enterprise customers, RIM's bread and butter, are fleeing en masse at this point.

For better or worse, I know a lot of lawyers, and I can say that law is the epitome of the technological sloth of enterprise. Most firms still use WordPerfect. I'm not joking. The CrackBerry has been the smartphone-standby of the legal industry since its introduction, and it has proven almost impossible to dislodge (many lawyers do, however, have iPhones for personal use). But now, I'm seeing Android and iOS devices making their way into the pockets of lawyers. Most giant mega-firms still require employees to use BlackBerries, but the security and management tools for Android and iOS have started proving their mettle among small and medium-sized firms, with fewer and fewer issuing a BlackBerry as standard hire equipment. If this is happening in the legal industry, you can bet it's been happening faster in almost every other sector.

Now is the time for drastic change, not foolhardiness. RIM needs to admit they've screwed up, and quit acting like a steward on the deck of the Costa Concordia. Given time, even the diehards won't be able to ignore the fact that their feet are getting wet. Android could be RIM's lifeboat - if it isn't too proud to accept that going down with the ship probably isn't a sound long-term business strategy.

Want To Show Off Your Android Pride? Slap This Cruzer Lite Androidified Case On Your Galaxy ...