Prev
Posts in the last
24 Hours
sorted by
Hottest
Next
Update: LG just made official the Spectrum at CES, confirming the below list specs. It's a beast, baby!

Here's one monster product (spec-wise, at least) that you won't have to wait months after CES for. Previously rumored as the Revolution 2, Verizon is set to launch the LG Spectrum on January 19, with a display that might even give the Galaxy Nexus a run for its money:

Update x3: David went hands-on at CES with this Spectrum, which is essentially the LG Nitro for Big Red. Have a look:

The screen may even be better than it sounds - LG advertises the fact that it uses the Real Strip subpixel arrangement, which will evidently make the screen "denser and sharper" than those that use Pen-Tile, though at such a high pixel density that isn't so much of an issue. Solidifying the screen as a main selling point, the Spectrum will have access to some exclusive HD content: Netflix HD (much as the original Revolution was supposed to have Netflix first), Smartmovie HD video editing, and ESPN ScoreCenter with live 720p HD video.

At this point, just about the only information that hasn't been disclosed is pricing, though with such high-end specs we can only imagine it will be up there with Verizon's other top-tier phones, at around $299 on-contract. But with a release so imminent, such information should be official soon.

Update from CES: The Spectrum is going to be more affordable than we thought -- $199 with a two-year agreement, out on January 19th. Bam! 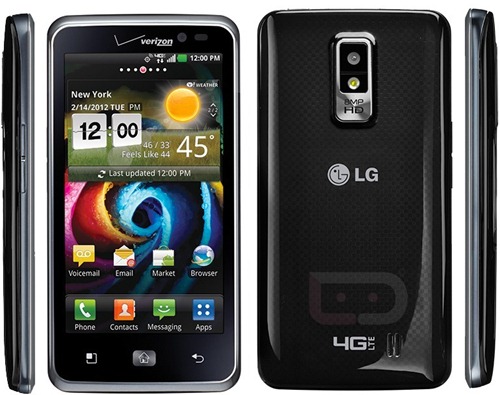 ESPN’s ScoreCenter app is supported by an exclusive HD video feed, giving customers the exclusive access to ScoreCenter stats, images and videos in 720p HD. Scoreboards and live game details include in-game stats, news and video. Personalization features allow fans to customize their ScoreCenter experience by highlighting their favorite teams and leagues from around the world, all in crystal clear high-definition.

Spectrum also features a Qualcomm® 1.5 GHz dual-core processor combined with 4G LTE connectivity for robust power, multitasking and download speeds. Verizon Wireless leads the way in 4G with the fastest and most reliable 4G network in the United States, covering more than 200 million people in 190 markets.

· ESPN’s ScoreCenter app offers the most comprehensive sports coverage available on an Android device whether you follow the NFL or Premier League, ICC Champions League or MLB™, NASCAR or Formula One™. Customers can follow teams from more than 500 leagues around the world with an exclusive 720p high-definition feed for Spectrum by LG while connected to the Verizon Wireless 4G LTE network or Wi-Fi.

· Spectrum supports Dolby® Digital Plus, which allows users to maximize their HD multimedia experience. Dolby Digital Plus can stream up to 7.1 channels of surround sound through home entertainment systems.

· Spectrum by LG will be available on Jan. 19 in Verizon Wireless Communications Stores and online atwww.verizonwireless.com

· Customers who purchase a Spectrum by LG will need to subscribe to a Verizon Wireless Nationwide Talk plan beginning at $39.99 monthly access and a smartphone data package starting at $30 monthly access for 2 GB of data.

Customers Can Score the Game Winner:

LG and ESPN are teaming up to give fans the chance to score an unbelievable sports weekend, including two tickets to ESPN The Magazine’s NEXT Party and a trip to the big game in Indianapolis on Sunday, Feb. 5. Customers can visit www.SpectrumbyLg.com

for official rules, details and a once-in-a-lifetime opportunity to be a part of sports history.

[Update: Hands On Video] CES 2012: Polaroid Takes The 'Phone' Out Of Smartphone, Announces The ...