Intel and Lenovo just announced the world's first Intel-powered Android smartphone: the K800. It utilizes Intel's Medfield mobile platform, with what we assume is the Atom Z2460 1.6GHz processor. Intel and Lenovo claim that the new Medfield platform is a "no compromise" mobile processor in terms of performance and battery life, though no exact figures were quoted. It actually looks pretty similar to Intel's reference device, and will be available in China (no US availability announced) some time in Q2. 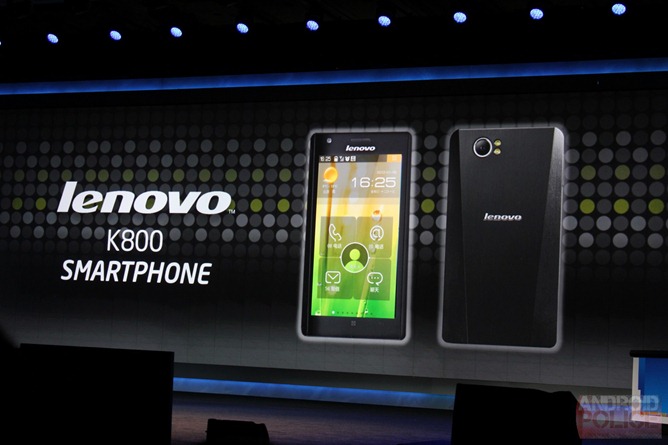 Intel also demoed said reference device on stage, but didn't tell us anything we don't already know. Intel was keen on showing off the battery life of its reference device, which while it only has a 1440mAh battery, manages an impressive 8 hours of 3G talk time, and a full 5 hours of 3G web browsing. Quite good for such a small battery. Intel is also claiming that the reference device has a 14-day standby time, but didn't disclose whether it was airplane mode or some hibernate function which made this possible.

Sadly, Intel didn't indicate that it was actively working on getting Intel-powered phones optimized for Ice Cream Sandwich, though an upcoming Lenovo Medfield tablet was spotted on the CES floor running Android 4.0, albeit without any hardware acceleration of the OS.