Unlike the ES IS12F, the Ascend P1 S doesn't slack in the spec department. It features a 4.3-inch Super AMOLED qHD (960x540) display with Gorilla Glass, a TI OMAP 4460 processor clocked at 1.5GHz, an SGX 540 graphics processor, 1GB of RAM, 4GB built-in storage, 8 and 1.3MP rear and front cameras respectively, GSM/GPRS/EDGE and UMTS/HSDPA/HSUPA bands, and Android 4.0.x, all powered by a 1670mAh battery. 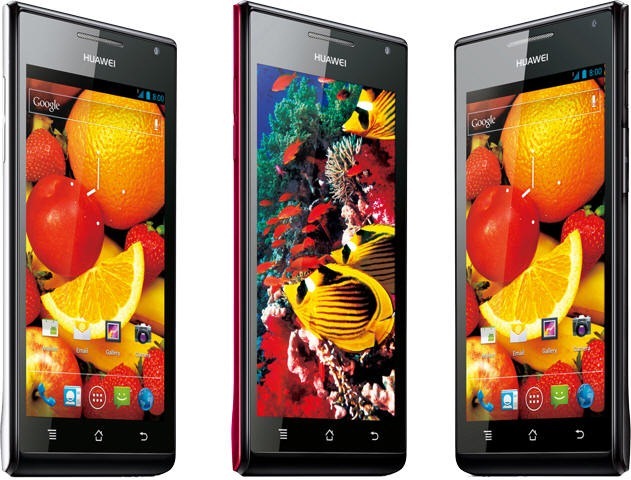 If you're not into rail-thin phones, Huawei is also bringing a thicker version of the Ascend P1 S to the market, simply called the Ascend P1. The P1 differs from the P1 S only by adding a whopping 1.01mm to the body, making it 7.69mm (all of which is presumably taken up by its 1800mAh battery).

Both handsets will come in a variety of colors, including metallic black, ceramic white, and cherry-blossom pink, and are expected to land in North America, Australia, the Middle East, and China sometime in Q2 2012, though no pricing or carrier information has been announced at this time.

Update #1: Our hands-on photos and video.

Huawei also unveiled the Ascend P1 which, as part of the same smartphone series, boasts the same functionality while measuring 7.69mm. Delivering the ultimate in elegance and speed with a 1670mAh/1800mAh battery, the Huawei Ascend P1/P1 S series provides the fastest multi-tasking, video replay and gaming experience in its class.

The Huawei Ascend P1/P1 S series feature a super-sleek and narrow 64.8mm body, elegant contours and an effortlessly stylish design. The PPVD back cover coating evenly distributes heat, and provides a strong metallic, three-dimensional design with a delicate texture. The Ascend P1/P1 S is available in metallic black, ceramic white and cherry-blossom pink with more colors to come to match your personal style wherever you are, whatever you're doing.

The Ascend P1/P1 S brings your digital world to life with its impressive 8-megapixel BSI rear-facing and 1.3-megapixel HD front-facing cameras with dual flash LED and HDR effect optimization. The Ascend P1/P1 S allows you to capture special moments in sharper, brighter and clearer detail both in light and dim environments. Relive your most memorable moments on the Huawei Ascend P1/P1 S with its stunning 1080p HD video-capture capabilities. Its high speed data connectivity through 3G, WiFi and Bluetooth and in-built social media capabilities enable you to instantly share your photos and videos via social media.

The Huawei Ascend P1/P1 S will be available in Europe, Asia-Pacific, North America, Australia, Middle East, and China from April 2012.