Update: Here's our hands-on with the Excite x10 (note: we misstated that the processor is a Snapdragon S4, it's actually a TI OMAP4430 - we blame Toshiba's open bar):

It's no secret that Toshiba's first attempt at an Android tablet was on the receiving end of a decent amount of criticism for its less-than-ideal size, so the company decided to super-model up its newest offering to the world, the Excite X10. The Excite, the world's thinnest tablet (for the moment at least), coming in at a mere 7.7mm thick and weighing in at only 1.2lbs. Unfortunately, while it may be able to wear the first! badge in regards to size, the rest of the tablet doesn't look as promising. 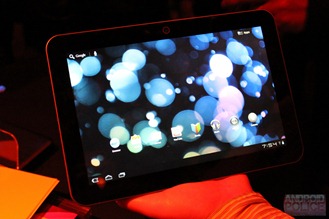 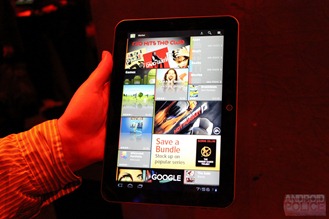 The Excite X10 offers the same specs we heard about back in September - a 1.2GHz dual-core TI OMAP 4430 processor and 1GB of RAM, a 10.1-inch 1,280x800 display, along with miniHDMI, microUSB, and a microSD card slot. The Excite will likely run Android 3.2 out of the box, and while Toshiba has already said that it's "Ice Cream Sandwich ready," a timeframe as to when 4.0 will show up on the device hasn't been mentioned.

Also announced today was an HSPA+ version of the port-packin' Thrive, which is ready to roll on AT&T's network. The "4G-equipped" Thrive will share identical specs with its Wi-Fi only brother, including a dual-core Tegra 2, 1GB of RAM, 10.1-inch display, and more ports than you can shake a stick at. 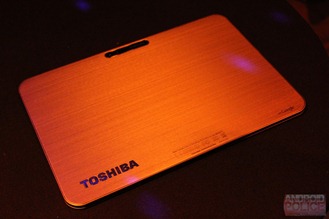 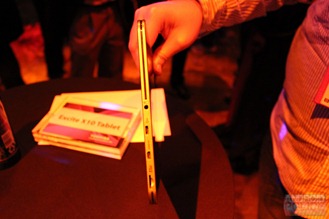 Both tablets are expected to be available sometime in Q1.