Update: The ad has been removed from CNET, but we've retained a couple images, below. Sounds like someone finally figured out the rather embarrassingly bad mistake they just made.

Well, it looks like someone doing ad-serving for CNET pulled the trigger a little early. If you head over to this CNET page (it may be taken down soon, in fact, it almost certainly will) you'll see an ad for the Sprint Galaxy Nexus, the first 4G LTE phone to hit Sprint's upcoming LTE network. Whoops. It looks 100% legit, and it looks like Sprint is planning on getting it out pretty quick judging by the advertisement: 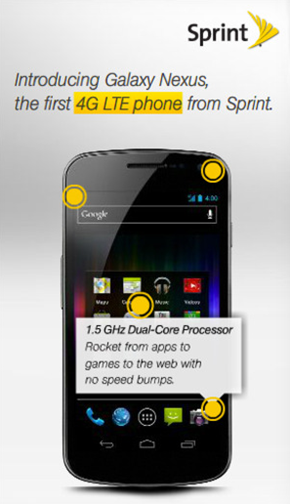 The people with the big leather chairs and power-ties at Sprint are likely going to be upset about this. As for the rest of us, it's probably the best news of the year (albeit only 5 days into the year). Oh, and did we mention that this ad indicates Sprint's Galaxy Nexus will be clocked at 1.5GHz out of the box (as opposed to the 1.2GHz Verizon version)? Interesting, indeed.