Update: Dow Jones Newswires apparently left out a key piece of information from Hesse's statement on throttling, in an example of truly stellar journalism and attention to detail (unfortunately, we have no audio or video record to verify Hesse's statements). Hesse was discussing throttling of those who are on networks that Sprint has roaming agreements with (which, admittedly, Sprint has a lot of - including with Verizon). While this still makes Sprint's ads technically misleading, the throttling really only applies to those who live in areas where Sprint's data network relies chiefly on roaming - not to those using primarily Sprint towers.

Unlimited data is slowly on its way to becoming a thing of the past here in the US, there's little denying it. Verizon and AT&T have full-fledged data "bucket" plans with usage caps. T-Mobile throttles users into 2G-oblivion if they exceed their "full-speed" data allotment. And now it appears Sprint, a company that has made its marketing bread and butter out of "truly unlimited," hasn't been entirely forthcoming about its management of the network's heaviest data users, particularly those in the top 1%.

CEO Dan Hesse said today that Sprint does actively throttle the top 1% of data users - a practice very similar to the one that Verizon customers were up in arms over when Big Red announced throttling would be applied to its legacy unlimited data customers who utilized over 2GB per month in "congested" 3G areas.

"For those that want to abuse it, we can knock them off," Hesse said at an investor conference Thursday. He said Sprint pares back data use for about 1% of users, a practice known as throttling.

While not actually quoting a specific amount of data consumption that would put customers in that top 1%, Hesse's statement is a clear contradiction to the carrier's advertisements claiming that they remain the only network with "truly" unlimited data. Take this ad, for example:

Or how about (cringe) this iPhone one?

The first ad above actually says T-Mobile will "slow you down" if you "use your phone a lot." Isn't that exactly what Hesse just admitted Sprint does? Without a doubt, yes.

The second ad is even worse, just look at this bit from the end: 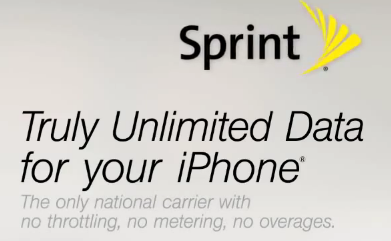 "... no throttling, no metering, no overages." Except that Hesse just admitted Sprint does throttle. There seems to be a disconnect between Sprint's marketing campaigns and the views of its CEO - something some people might call false advertising. I certainly would.

While I'm not of the opinion that throttling is necessarily a bad thing (faster data for everyone), when you're advertising your unlimited data network, and one of the premises of that advertisement is that it is truly, throttle-free, un-metered unlimited access, you should probably make sure that's actually true. If it's not, you're misleading consumers, and probably asking for a class-action lawsuit, to boot.

[Updated: Here Are The Winners!] Giveaway: Win One Of Fifty PowerAmp Licenses - Just Tell Us ...