Update: Anymode, after what we assume was a good-natured cease and desist letter from AT&T, has denied any of the information in its CES Media Alert (pictured below) is true. If we're being frank, they're 100% completely full of beans. Someone made available information they weren't supposed to, and someone got upset. Too bad official photos of the AT&T Galaxy Note were leaked this morning.

The stylus-toting Samsung Galaxy Note (or as I call it, the Samsung Galaxy S II: Andre The Giant Edition) has been quite successful overseas, and US consumers have been clamoring for a chance to get their hands (both of them, mind you) on the mega-sized 5.3" handset. It seems now that a release is imminent, and as of a few days ago was rumored to be happening on the AT&T network, possibly with LTE connectivity.

Now, a Korean phone accessory manufacturer has let loose in a pre-CES PR email that they have been chosen as the OEM vendor for Galaxy Note accessories by AT&T (presumably, they didn't exactly get permission from Ma Bell): 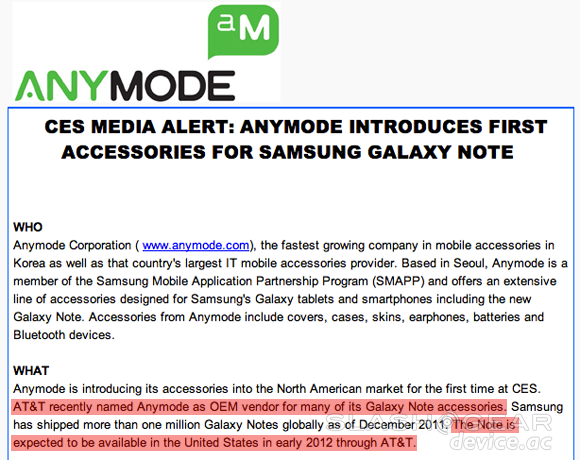 AnyMode seems to think the device is scheduled for a release early this year in the states, which would make sense given the fact that the Note has been out since October in Europe. Also, we couldn't help but post this delightful AnyMode skin, which strikes me as the smartphone equivalent of putting neon paint on a Corvette:

We'll see in the coming week if AT&T outs the Note (where could they possible hide something that big?) at CES.

[The First Annual Android Police Andy Awards] And The Winner Of The Award For Best Non-Nexus ...

Corning To Showcase Gorilla Glass 2 At CES, Exhibit New Applications For The Next Generation Of ...