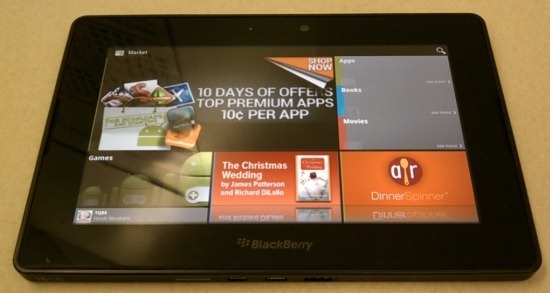 Unfortunately, consumers never really went after the PlayBook in droves, and sales went from less-than-great to absolutely terrible by Q3 of 2011, at just 150,000 units sold for that 3 month period. By comparison, December sales estimates for Amazon's $200 Kindle Fire range from 3-4 million. RIM's tablet has managed to sell less than a quarter of that amount over the course of 8 months.

Retailers have been dumping off the CrackBerry tablets at $200 apiece for the lowly 16GB version off and on since November, and this price point has proven to be fairly popular with consumers, with stores like Best Buy and RadioShack regularly selling out of the device during the holiday season. To be fair, this was probably caused in large part by early holiday shoppers looking to get good deals on "a tablet" to gift to someone, with little knowledge of what it is they were actually buying, aside from being acutely aware of the fact that it was $300 cheaper than an iPad 2. At $200, the PlayBook out-specs Amazon's Kindle Fire considerably in terms of actual hardware, though it lacks any sort of app ecosystem without hacking the Android Market onto it. Even then, many apps just don't work with the device. Heck, it doesn't even have a native email app.

So, last night RIM decided to get aggressive with sales of the device, and initiated a full-on fire sale - unfortunately, they didn't quite make them cheap enough: $300 for all models. While this is the lowest price the company has ever sold the 32GB and 64GB versions of the device for, there's the glaring issue with the 16GB version coming in at the $300 mark when it has previously (and often) been offered for $100 less in the past few months. It seems more likely that RIM is attempting to offload what have probably been the almost impossible-to-sell 32 and 64GB iterations, the latter of which has an MSRP of $700 (and yes, it's Wi-Fi only).

Since RIM had to take a nearly half-billion dollar charge against its revenues in Q3 2011 due in large part to its unsold stock of PlayBooks, a clearance sale of some kind was inevitable. Our guess would be that Q4 sales of the device failed to meet RIM's expectations, and that they're now trying to sell off the device en masse before competing devices from Apple and various Android tablets start to make the PlayBook look woefully outdated.

Of course, RIM's biggest obstacle in getting the PlayBook into the hands of consumers will be the Kindle Fire, which despite being a less technically powerful device, has access to a near endless supply of Amazon videos, music, and Appstore apps. At $300, it's hard to see anyone choosing a 16GB PlayBook with its barren, dilapidated app landscape over the cheaper, content-rich Fire - a device whose future seems almost inevitably bright in comparison to the RIM tablet, which already apears to have one foot in the grave.

[Monthly Home Screen Challenge] And The December 2011 Winner Is…