Still holding out for a bargain on an unlocked Galaxy Nexus? Thanks to Mobile Daily Steals, you may be one step closer to getting your hands on one of 2011's most hotly anticipated devices (not to mention Ice Cream Sandwich). MDS is offering the 16GB Galaxy Nexus (unlocked) for a (relatively) paltry $559.99 - a huge discount compared to other prices we've seen. The GSM unlocked variant of the Galaxy Nexus will work with a wide variety of GSM frequencies, including AT&T and T-Mobile. A full list of compatible frequencies are listed at MDS' sale page. It's worth reiterating that (unfortunately) a 32GB GSM version of the Galaxy Nexus has not yet been priced. However, that doesn't make this any less of a bargain. 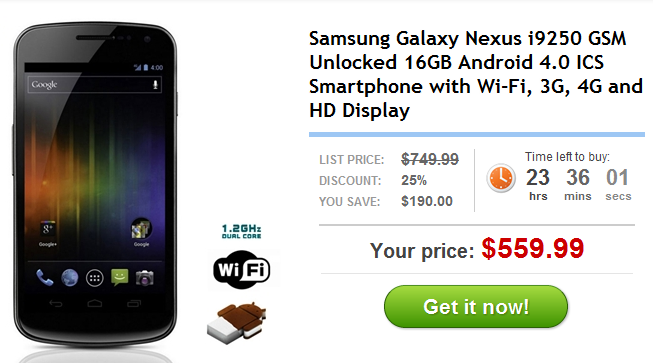 Just in case you haven't been paying attention, here are some of the Nexus' killer specs one more time:

If you've been yearning for the newest Nexus device (and Android's latest and greatest iteration), head over to Mobile Daily Steals and take advantage of this awesome deal before time runs out.

Google Requires OEMs To Include The Stock Set Of UI Widgets In All Ice Cream Sandwich Devices, ...

Android Market Cracks The 400,000 Application Barrier, Becomes The Largest Store In The World ...