Prev
Posts in the last
24 Hours
sorted by
Hottest
Next
Update 12/22: Guess what? Yeah, It's back again. Just in time for Honeycomb.
Update 12/12: If you missed this opportunity the first time around, the gods have shined upon you. It's back.
Update: Hope you grabbed this deal while it was live, because it's gone now!

For anyone holding out on buying the HTC EVO View 4G on Sprint, the opportune moment just arrived. Over at eBay's Daily Deals site, the View 4G is going for a mere $240 with no contract - a solid $160 off the current Sprint price (it doesn't even look like you can get it without a 2-year contract from Sprint). 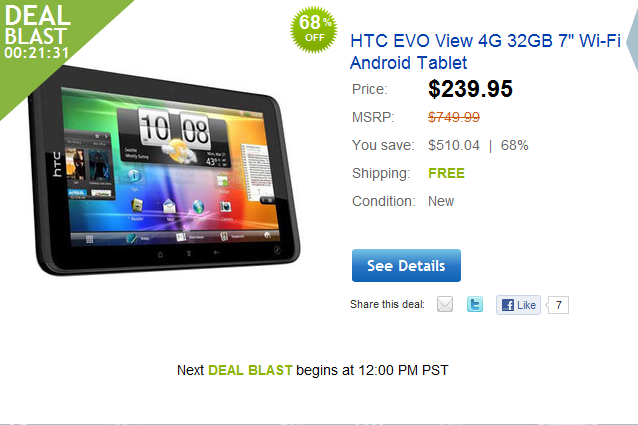 If you're reluctant to pick this little guy up because it's only running Android 2.3, keep in mind that its GSM counterpart started receiving its Honeycomb update this morning, so this one probably isn't far behind.

This deal is ending super-soon (but may be extended), so you better hurry!