I'll be the first to admit, I'm a big fan of Klipsch. I like their style, their sound signature, and their products generally. I started with a ProMedia 2.1 computer speaker setup, and have since graduated to a pair of their reference bookshelf speakers, and I've been pleased the whole way through. I had never, however, tried their headphones. Until recently, Klipsch's in-line control headphones designed for smartphones had only fully worked with iOS devices. With the S4A, that changed - it's the first Klipsch headphone designed specifically for use with Android devices. 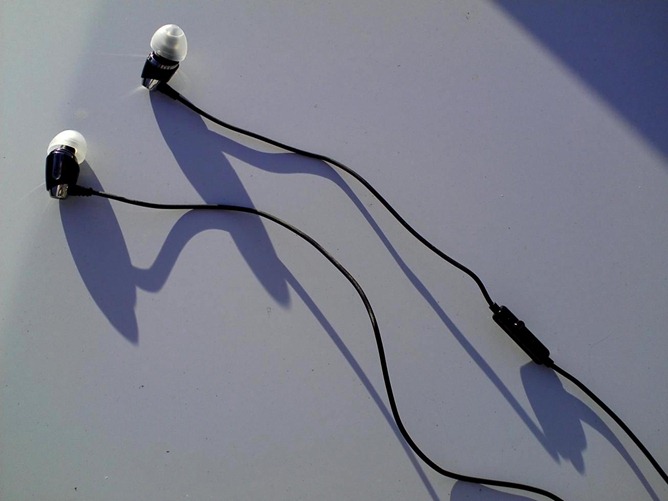 What's the word? They're definitely a Klipsch product. Deep, resonating bass and bright mids and highs bring your favorite tracks to life in a way few other headphones can. That's not to say they're superior to other high-end headphones, necessarily, but more that they have a particularly unique character.

The S4A also has a fairly awesome trick up its sleeve, too, in the form of the Klipsch Control app, allowing you to customize your headphone experience with all kinds of options. It's a true value-added feature for the S4A, and is definitely not something to be ignored.

For $100, the Klipsch S4A isn't a headphone you can really go wrong with. Sure, there are probably headphones with better fidelity and clarity around this price point, but none of them have the comfort, added functionality, and character of the S4A's. 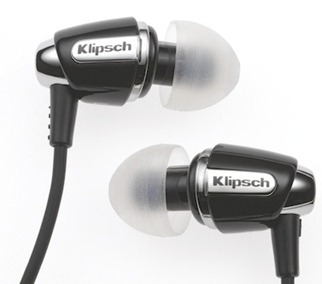 I love wearing the Klipsch S4A's. They are, hands down, the most comfortable in-ear headphones I have ever worn. I've heard that Klipsch's "step up" from the S4 line, the X10's, are even more comfortable, but unfortunately there's no Android-friendly version of those available. Still, the S4A's are very, very easy-wearing. You'll barely notice them, aside from the fact that they're pumping rockin' tunes into your ears.

As far as design goes, Klipsch tries to make their earbuds pretty small and light, so they're definitely on the littler side. They're small, sleek, and somewhat unique, given Klipsch's ovular earbud tips.

These earbud tips actually have a patent, and Klipsch claims they're a big part of what makes their headphones so comfortable and easy to wear. You get 4 pairs with your S4A's, along with a clip for the in-line microphone, whose placement on the right earbud's cable puts it fairly close to your mouth without the clip anyway.

The Klipsch S4A is definitely, to an extent, reliant on the Klipsch Control app. It's a great piece of software when it works, and luckily for me, it seems to work flawlessly on my DROID BIONIC. 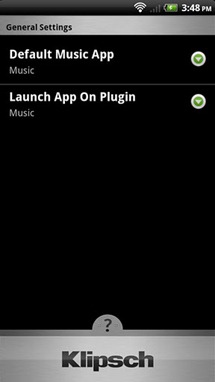 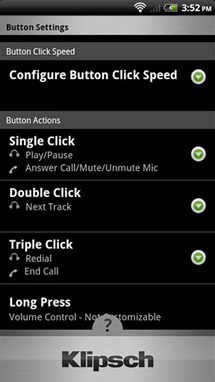 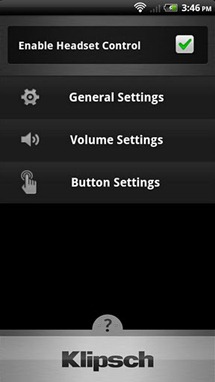 As you can see, the app lets you customize all sorts of things. You can determine the volume your phone is set to when the headset is plugged in, what % of the maximum volume to make the maximum while using the headphones, what actions each number of clicks on the function button will map to, as well as set your phone to auto-launch your preferred music app when you plug your S4A's in. This really is a great idea.

But judging from Market comments, Klipsch hasn't exactly been fastidious about making sure its app works on all Android phones properly. To purchase an S4A expecting this compatibility, and then to not receive it, would definitely be frustrating. As I said, it works for me on my BIONIC, but users of older or more obscure phones might have cause to be wary on this point.

The microphone on the S4A's works decently, though persons on the other end did comment about my seeming a bit "distant," not necessarily quiet, just a little more echo than usual.

Klipsch products have a reputation for their distinctive sound characteristics. Rather than being particularly flat or balanced, most Klipsch speakers are noted for having a particularly bright, resonating tone with deep and accurate bass. That's not to say the S4A's are inaccurate or lacking in fidelity, so much as they aren't what you'd call in-ear "monitors." Klipsch definitely adds flourishes to your music that you would not otherwise hear, but those additions are usually quite enjoyable.

In particular, live tracks come alive on the S4A's, gaining brightness and depth that their recordings may not fully express on their own. Music with a lot of bass or complex low-frequency arrangements really shine on the S4A's, too, as you can really hear the bass notes underlying your favorite songs with clarity and deep, accurate resonance. If you want a good earbud for workout, dance, or any other high-energy music, the S4A's are a truly superb choice.

For lower-key genres, the S4A's still sound great. While they may not have the fidelity or bring out all the subtle nuances of more expensive in-ear monitors, they add a character that makes for a unique and enjoyable listening experience you won't find anywhere else.

The Klipsch S4A's are a great in-line control headphone (if your device works with the Klipsch Control app). For many, the S4A's will probably provide a more enjoyable listening experience than more accurate, but less energetic in-ear monitors that may be more expensive, but lack that distinctive "Klipsch sound."

They'll also lack the comfort of the S4A's, which I would say isn't rivaled by any other in-ear headphone I have ever used. They really are that comfortable. For $100, the S4A's are a difficult product to overlook in any serious search for a high-end Android headset, and are worthy of consideration even for those looking to spend a little more on their next pair of headphones.

Boom, Baby! Over 700,000 Android Devices Being Activated Every Day