The team behind Firefox for Android teased the upcoming release with a tablet-friendly design back in late August, and the final version of FF9 just landed in the Android Market. The update not only features a specialized tablet interface, but also boosts performance and startup speed and brings some HTML5 tweaks to the scene, like camera input support and form validation. 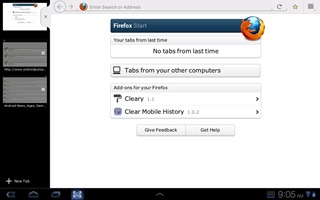 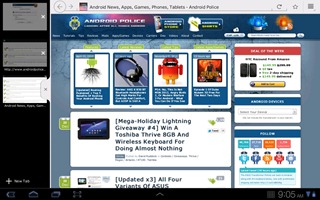 The tablet interface offers some nice features over its phone-centric counterpart, like full-screen browsing in portrait, optimized tabs for easy thumb-switching between open pages, and a quick access buttons on the Action Bar. The overall feel and functionality of the finalized app is definitely a big improvement over the beta version that I tried when it was first announced, but the FF team has made one serious omission in this release: the option to change the user agent. That's right, even while browsing on the large screen of a tablet, you'll be stuck looking at mobile websites. Hopefully this is something that will be incorporated in a future update, but until then, I just can't use this as my daily driver.

FF9 is still definitely worth checking out, especially if you don't mind looking at mobile sites every once in a while. Hit the widget to give it a go.

Boom, Baby! Over 700,000 Android Devices Being Activated Every Day