Before seeking out a few companies to find the best Android-friendly headphones around, I had never heard of Etymotic Research. Apparently, they've been around quite a while - since 1983, actually, and were among the first companies to market in-ear headphones to consumers. They actually claim to be the inventors of in-ear headphones (or "canalphones"), though whether or not that's actually true is apparently an object of some controversy. 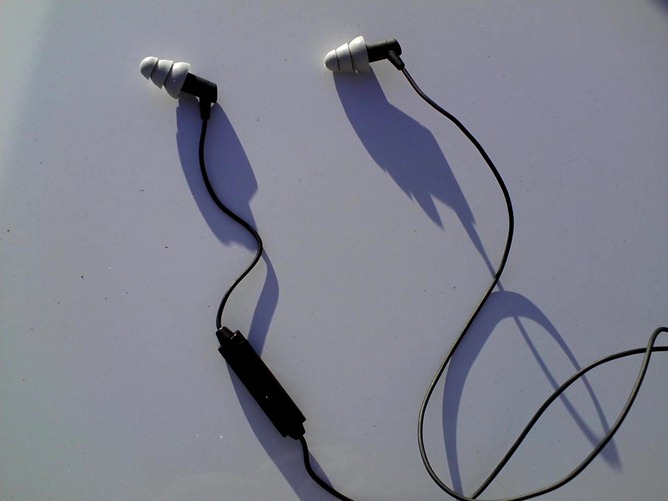 Anyway, the good folks at ER sent me a pair of their hf2 in-ear headphones with Android-friendly inline controls and microphone, and I have to say, these headphones rock - the sheer difference in sound quality from your standard $30-80 earbuds is mind-blowing. The included in-line microphone is pretty great, too. Here's a brief summary on these little guys:

We're starting with comfort because this is, without a doubt, going to be the single most important consideration for most folks before buying these headphones. As you can see in this picture, the hf2's have a very unique earbud tip compared to your standard in-ear headphones. That's because the hf2's aren't technically in-ear headphones at all, they're canalphones. And that's because they reach a significant distance inside your ear canal while wearing them.

This is one of the big reasons why these little guys are so great at noise-cancellation, because the triple-seal tips isolate far better than a single, circular tip you'll find on most earbuds. This is a good thing, because it means you'll be able to enjoy your music without having to crank the volume, meaning less chance of long-term hearing loss.

The negative aspect is how they feel. "Weird" is how I would have described that feeling after my first hour or so with them. And that's to say, they really get in there. But after a day of use, they felt far more natural, and I really appreciated the fantastic isolation they provided. As far as long-term wearing goes, they do give you a little fatigue, for me especially because I had to put on the larger tips, as the smaller ones wouldn't even come close to making a seal on my apparently gigantic ear-holes. After an hour or so of wearing them, you may want to take them out for a few minutes. Alternatively, the foam tips are far less fatiguing because they don't penetrate so far, but they definitely feel different - like you're wearing ear plugs (because they essentially are earplugs).

Of course, the alternative to all of this is to go to an Etymotic-authorized fitting location and pay for them to make molds of your ears. No, seriously. If you do that, I imagine they'd fit like a glove (an ear-glove, that is), but I also think many buyers probably aren't going to shell for that extra unless they're buying significantly nicer headphones.

The microphone on the hf2's is top-notch, far better than what you'll find on most earbud headsets of this type. It hangs close to your face, eliminating the need for a clip. Obviously, I heard people on the other end just fine, but how well did they hear me? No one noticed I was using an external microphone, so apparently pretty well, in fact, some actually said I sounded much better than normal. So the microphone gets high marks.

The in-line controls, on the other hands, are pretty lackluster. I couldn't get pause/play functionality to work on any music app (Pandora, Google Music, Subsonic, Slacker), instead, I was just directed to Bluetooth voice commands whenever I'd press the function button. Call answer and hang-up do work, though. But otherwise, the inline controls are almost totally crippled by what is apparently a lack of proper Android compatibility.

Here's where things get better. The hf2's sound amazing. Like, really amazing. If you've never tried headphones using balanced armatures (almost exclusively, headphones under $100 use coil drivers), you need to. The fidelity is just outstanding, every little piece of the song comes to life, and you actually will hear things you never heard before in your favorite songs. Because the soundstage is so isolated from environmental noise, it also means you don't need to hit maximum volume to hear those little things, either. For classical, classic rock, jazz, and other non-electronic music, the hf2's provide a supreme listening experience at a price that belies their quality.

The sound is extremely flat and balanced, meaning you'll hear recordings as they were meant to be heard. There's no "enhancement" going on here - just really good, really clear, and really accurate sound.

If you're looking for more bass-heavy headphones, I'll say it right now: these aren't up your alley. While bass-heavy songs don't sound at all bad on the hf2's, they're probably not giving you the full dynamic "experience" for low-frequency bass. You'll hear all the bumps and booms, but they won't be as bumpy or boomy as you might expect or desire. The hf2's are single-armature headphones, and typically you need multiple armatures to bring out the bass (or a separate bass driver) on earbuds of this type.

As far as isolation is concerned, Etymotic advertises 35-42dB of noise cancellation, depending on the earbud tips your use (foam provides superior isolation). And isolate they do - you'd be lucky to hear an oncoming train while listening to music with the volume maxed out. Etymotic actually claims their earbuds provide the best isolation of any on the market, and I'm inclined to believe them.

At $100 street price ($179 MSRP), the Etymotic hf2's are hard to go wrong with, unless you can't stand the way they feel in your ears, or you're looking for earbuds that really bump, not sing. In fact, I'd say their fidelity puts them on the level of significantly more expensive offerings from their competitors - you're really getting a $200 pair of headphones in terms of sound quality. And compared to slightly cheaper (say, $75-100) earbuds, the hf2's are miles ahead in terms of fidelity and clarity.

If you can, try a pair before you commit to a purchase (or get them somewhere you can return them, just in case), but if you care about uncompromising sound quality and noise isolation first and comfort second, the hf2's are definitely a no-brainer at this price point.

[Updated: Here Are The Winners!] InformIT Holiday Book Giveaway #4: Win One Of Ten Copies Of ...