Although we heard rumblings that the Prime would be delayed, some lucky customers have already received their Asus Transformer Primes, and it was briefly available (again) on Amazon before quickly selling out (again). Based on the universally glowing reviews (including my own), you're probably well aware by now that the Prime is a truly excellent piece of tech. But how does it compare to its older brother, the Transformer (TF101)? Is it worthwhile for TF owners to upgrade to the TP?

Before diving in, let's run over the Prime's specs: 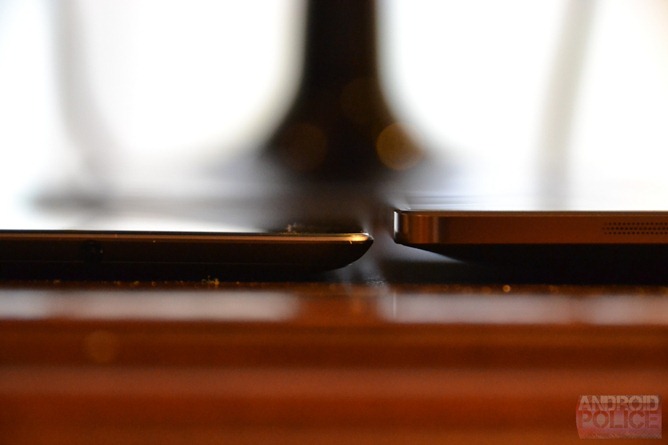 Dimensions and build quality are probably the two most significant factors in tablet purchases for casual consumers, so it should be no surprise that Asus placed an emphasis on how thin and light the Prime is. Even better, the dock has seen a size-shrink to match. This should come as especially good news to owners of the really rather portly TF. Amazingly, the sole downside of the shrinking seems to be the loss of a full-size USB port - a fairly reasonable trade-off in my book.

Build quality was good on the original TF, and with one exception, has been improved upon with the TP. While the original was mainly covered in plastic, the Prime is swathed in aluminum. Coupled with the aforementioned light weight, the Prime is sturdy enough that it can be picked up by a single corner with no give. But there is that exception: the aluminum is (apparently) easily scratched. Despite being babied during the review process, the back somehow picked up a roughly four-inch minor scratch. It wasn't enough to catch a fingernail and the spun aluminum design helped hide it, but in certain light it was noticeable. 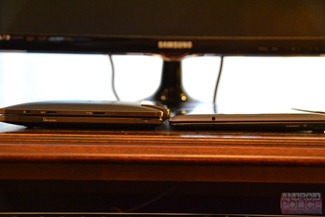 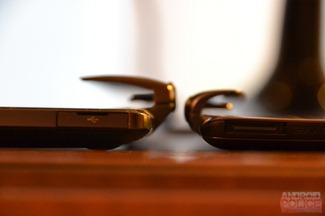 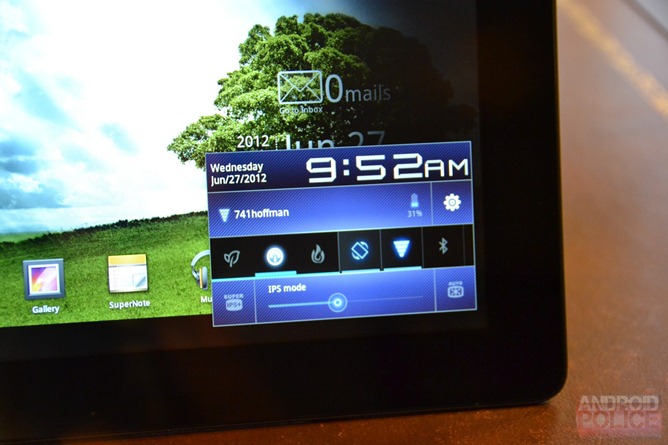 While the screen on the TF was relatively unremarkable (it was good, but not enough to stand out... aside from some backlight bleeding, that is), ASUS has seriously stepped up its game on the TP. There are a few major points that put the screen on the Prime ahead: first, the screen now features Super IPS+ mode which substantially boosts brightness (up to 600 nits, versus 380 on the TF). Second, the company has pushed the display closer to the glass that covers it, the net result of which is better black levels and viewing angles. Bonus: there's also less glare with the Prime.

For most users, the improved black levels, wider viewing angles, and decreased glare will probably be the most beneficial - Super IPS+ is great for outdoor viewing, but how often do you view your tablet outdoors, really? And even if you would conceivably use the Prime outdoors on the regular, you'd be hit by the understandable (but really quite impressive) battery drain that accompanies SIPS+ mode. TF101 owners will be disappointed to hear that the Prime also suffers from some backlight bleed, though not as bad on the original.

TL;DR: Brighter, blacker blacks, decreased glare, and less backlight bleed on the Prime. What's not to like?

Casual consumers may favor size and build, but for most technophiles, it's all about power and performance. As you're likely well aware, the TP packs NVIDIA's new Tegra 3 quad-core CPU, which provides quite a bit of horsepower. Check out the benchmark results from the Hardware, Performance, and Benchmarks section of my review: 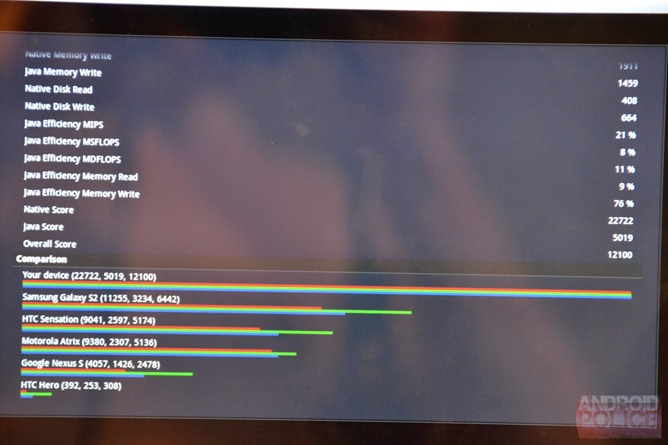 The numbers speak for themselves, for the most part (except for Linpack... what happened there, Prime?). But more important than the (generally) impressive numbers, the Prime just feels smooth and snappy all the time. Before receiving the Prime, I considered my TF101 to be plenty smooth and snappy, but going back to the TF now just makes me a bit sad.

Perhaps one of the best things about the Prime is gaming power. NVIDIA put a lot of marketing and development effort into making the Prime a great gaming device, and it shows in games like Glowball, Shadowgun, and Big Top THD - not to mention it's awesome to play games like Riptide on an HDTV using a wireless controller.

Bonus: battery life is better on the Prime than it is on the original TF, whether it's sitting idle or being used heavily. The Prime's three performance modes undoubtedly help here, as does the Tegra 3's companion (fifth) core.

TL;DR: The Prime is extremely powerful, which makes for a fantastically smooth experience that should only get better with the update to Ice Cream Sandwich. To top it all off, the battery life is also better. 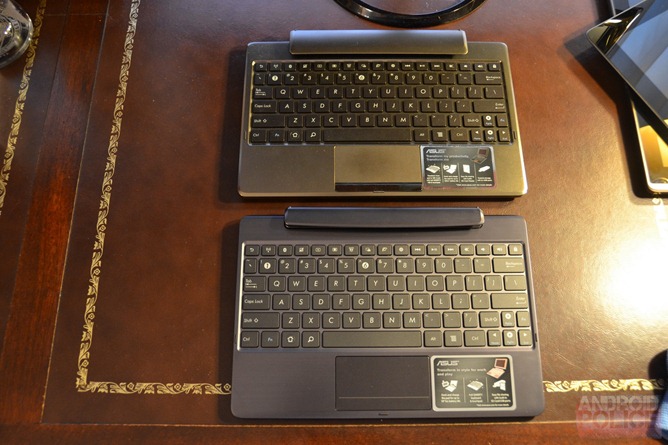 At the same time, the TP dock is much smaller and lighter - and feels better thanks (again) to the aluminum build, light weight, and the thoughtful inclusion of slightly rubberized keys. (Note, however, that each dock is compatibile only with its accompanying model. That is, the TF101 can only be used with the TF101 dock, and the TP can only be used with the TP dock.)

TL;DR: Déjà vu, as the short version here is nearly the same as it was in the Build section - it's thinner, lighter, and wrapped in aluminum. What's not to like? 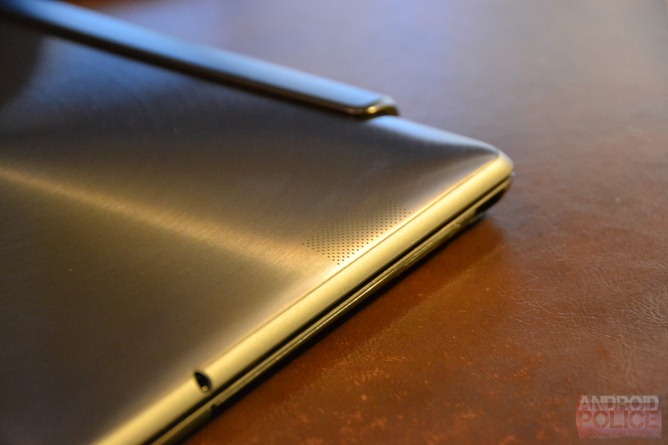 Connectivity: Compared to the TF101, the TP gives up little by way of connectivity despite its heavy diet. In fact, virtually the only loss was that the Prime has just 1 USB port while the TF has 2.

Camera: The Prime is really the first tablet to feature a high-quality camera, and it shows... somewhat. It's still a camera on a tablet though, so it should really only be used if your camera and phone are both M.I.A. (plus, you just look like a complete goober taking pictures with a 10" tablet.) 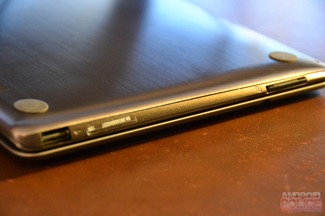 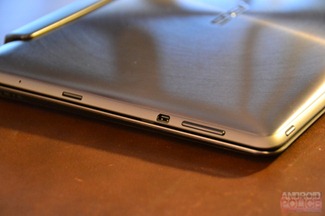 Speaker: On the upside, the sound quality is very good. On the downside, there's just one speaker, and it's placed exactly where most people have their hands when holding the tablet in landscape mode. I'm guessing it's placed there by necessity, because it's hard to imagine anyone who thought that was a good place for a speaker could ever gain employment.

In a victory that should surprise pretty much nobody, the Prime takes it in a landslide. In fact, the Prime suffers losses against the TF in just two minor ways: speakers (only one, and it's in a bad place), and the number of USB ports (one versus the TF's two) - but all told, both losses are negligible.

Still on the fence about whether or not it's worth the upgrade? I'll put it to you this way: the Prime is amazing, and if you can afford it, you won't regret the decision. But if you're pinching pennies and/or you've spent all your money on other people this holiday season, don't worry - the TF101 is still a great tablet, and putting up with the bulk is really the biggest downside for the time being (until more software support for quad-core CPUs comes along, that is.)