Ever since we reviewed Ski Challenge 12, I have been on the hunt for an equally incredible snowboarding game. Com2uS ended my search with the release of SummitX Snowboarding, a ridiculously awesome downhill challenge game for those of us who enjoy boarding more than skiing. 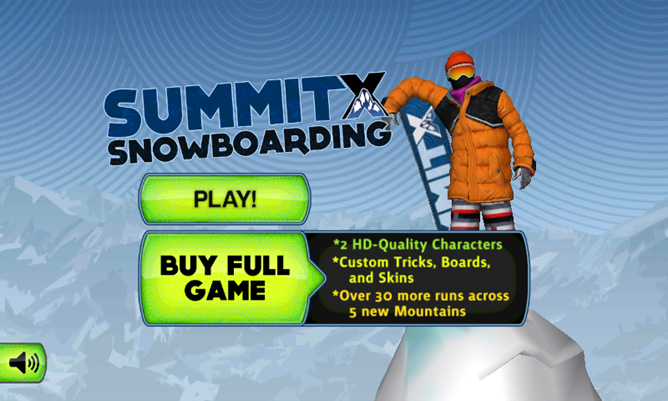 Update: The developer recently added information about pricing in the description. Thanks guys!
I would like to mention a minor complain before we go any further - SummitX is listed as free in the Android Market and nowhere in the description does it mention payment of any kind. The description boasts 36 runs on 6 mountains, customizable boards, and different character options, however, when you start the game you’ll be greeted with an option to buy the full game for $4.99. Without purchasing the full game you’ll only have access to 3 runs, one board, and no character options.

Don’t get me wrong, I'll be the first to tell you that this game is worth the money, but I feel that the method used to draw players in is a bit deceptive.

Aside from that small annoyance, this game is incredible. The graphics are beautiful, the game physics are extremely realistic, and the gameplay is exhilarating.

The goal of SummitX is quite simple - hit the slopes, aim for the best time, and do awesome tricks while you're at it. This game really has quite a bit going for it. The gameplay is about as realistic as it gets, the visuals are stunning and really add to the overall player experience, game physics are spot on, and the soundtrack makes everything 10 times better.

You have 32 different runs to barrel down, trying to your beat your best time and score by hitting jumps and going through flags. What's great about each course is that there is never a straight line down the mountain, meaning you can try different routes to beat your high score. You can also see how your scores stack up against the rest of the world, thanks to OpenFeint compatibility.

After you finish a run, you'll be awarded medals and cash based on your overall score. The medals help you unlock new runs and mountains, while the cash can be used to customize your board. As you progress through different mountains, the score required to get each medal increases, so going all-out in essential. You will have to become more creative with tricks and setting up big jumps if you want to keep unlocking new runs, and I think that's a defining feature of SummitX.

What I love most about this game is the control system. There are two thumb sliders that you move back and forth to mimic the natural movement of a real snowboarder. If you've ever snowboarded before then you know what it feels like to control the board, these controls bring that feeling to your fingertips. If you haven't snowboarded before, the controls make the game more exciting because you have to learn how to properly control your character.

In my opinion, everything snowballs (pun intended) down from there. The controls make the gameplay realistic and exhilarating, which leads into really appreciating the graphics and the rest of the game on your descent down the mountain.

Overall, SummitX Snowboarding is a very well-made game. It provides the player with exciting, realistic gameplay that really never gets old. The only issue I have with the game is the somewhat deceptive 'try-and-buy' tactic Com2uS uses. I would have more respect if they actually released a lite version of the game, along with a paid version. I would even appreciate it if they listed the price in the description. The game is worth the money, so I don't see why listing a price would be an issue.

Hit the link below to check it out for yourself.