If, like me, you're a fan of the action-horror genre of gaming, then you'll be pleased to know that Dead Space just landed in the Android Market, leaving its EA Store exclusivity behind.

This gripping sci-fi thriller not only brings intense gameplay to your mobile, but a rich storyline and cinematic horror that is sure to chill you down to the very bone. Stunning visuals, along with a movie-quality score make this game a must have for anyone looking for more than simple puzzle games on-the-go.

It's not all about looks, though - this game also features intuitive controls that integrate directly into the game. Simply tap and swipe your way through the carnage and macabre environments.

The mobile version of the game also features a couple of exclusive weapons, as well: the Plasma Saw and Core Extractor. The names alone invoke the desire to shred something up, don't they?

There is one downside though - it's not available on tablets. Hopefully EA will push an update to this game of gruesome goodness that will enable tablet support in the future - why have all that awesome if you can only play it on a tiny screen? 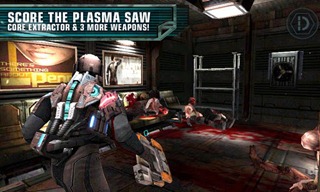 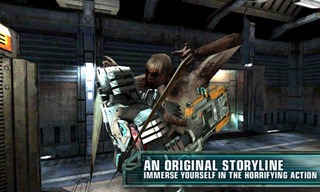 The game will set you back seven-bones, hit the widget to buy.