We love Dead Zebra's Android figurines - especially when there's a limited edition one up for grabs, like the awesome new Toy Soldier (which is sold out for now, unfortunately). Andrew Bell of Dead Zebra has kindly given us five of these little guys to hand out to hand out to our readers. 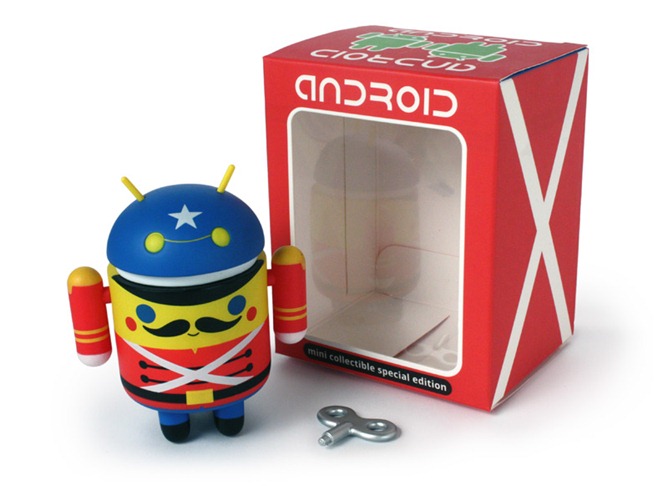 He's going to take over the world - with smiles.

We're keeping this contest simple: all you have to do to enter is comment on this post explaining why you want an Android Toy Soldier, and we'll select 5 comments at random as winners.  BE SURE TO INCLUDE A VALID EMAIL ADDRESS IN THE EMAIL FIELD FOR YOUR COMMENT (re-comment if your first comment did not have one).

This contest is open to entrants from the following countries:

THE UNITED STATES, CANADA, MEXICO, CHILE, AUSTRALIA, NEW ZEALAND, SINGAPORE, INDIA, FRANCE, BELGIUM, THE UNITED KINGDOM, LUXEMBOURG, GERMANY, AUSTRIA, SWITZERLAND, SWEDEN, FINLAND, DENMARK, NORWAY, SPAIN, IRELAND, RUSSIA, THE NETHERLANDS, SOUTH KOREA, SOUTH AFRICA, TAIWAN, ITALY, PORTUGAL, SLOVENIA, MALAYSIA, VIETNAM, THE PEOPLE'S REPUBLIC OF CHINA, THE CZECH REPUBLIC, CROATIA, THE UKRAINE, POLAND, BULGARIA, AND HUNGARY WHICH ARE: (i) OVER THE AGE OF MAJORITY IN THEIR COUNTRY OF RESIDENCE ON THE DATE REFERENCED BELOW AS THE START DATE FOR THE CONTEST; AND (ii) WHO ARE NOT RESIDENTS OF THE STATE OF RHODE ISLAND IN THE UNITED STATES; THE PROVINCE OF QUEBEC, CANADA; OR RESIDENTS OF THE AUSTRALIAN STATES OF VICTORIA, QUEENSLAND OR THE AUSTRALIAN CAPITAL TERRITORY ("ENTRANTS").

MIUI Gets Into The Lockscreen Game, Releases MiLocker To The Android Market