In case you haven't heard, Google has been offering 10 apps a day for just $0.10 each as part of a 10 day promotion to celebrate the 10 billionth download from the Android Market. For end users, this promotion has been fantastic, as it offers quality paid apps for next to nothing. In fact, the promotion has also been great for the developers behind the promoted apps, who have seen hugely increased exposure, skyrocketing purchases, and higher spots in the "Top Paid" list. Let's take a quick look at the current state of the Top Paid list, actually: 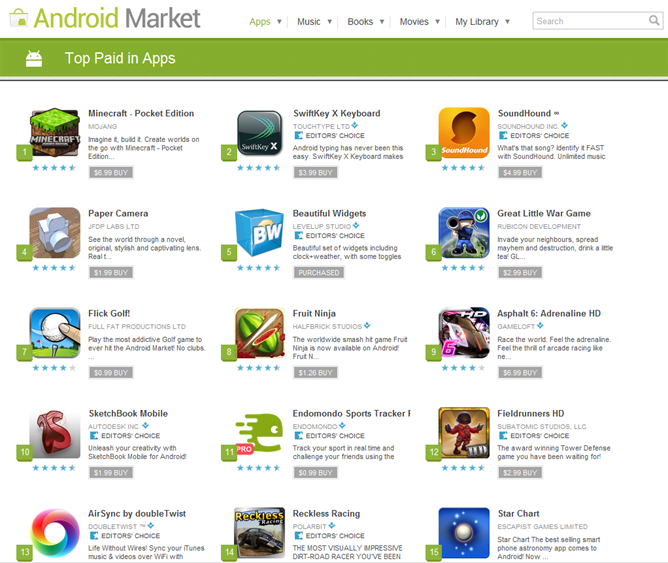 Look familiar? You may notice that just about all of the top apps are those included in the 10 billion download promotion over the past few days. This is where the promotion has done some damage.

Developers who were not invited to be a part of the $0.10 promotion are getting burned by the sale, particularly those whose apps used to be in the Top Paid list. By allowing the sales of promoted apps to be reflected in Top Paid listing, Google is essentially launching selected apps to the top of the list, while simultaneously making it harder for other apps to get there - all for a short-lived promotion. The worst part is that the situation is getting worse every day – essentially, each day that the promotion runs, 10 more apps are piled on top of those that were in the Top Paid rankings but did not make the cut for the celebration. In the end, without serious promotional effort on the part of the developers, there will, in effect, be up to 100 apps (not all of which previously held spots in the top rankings) impeding the sales of apps that may otherwise hold those positions. It's worth noting that many developers of top paid apps were not even approached about the promotion, pretty much sealing their fate for the next 10 days and potentially beyond.

Interestingly, participation in the promotion was not mandatory, as confirmed via Twitter by anderwebs, the mind behind ADWLauncher EX.

Ostensibly, the result of the promotion was not an unintended consequence. It is a predictable result of such a high-profile promotion, and likely made the decision to participate pretty easy for those invited.

I think the real question here is whether sales resulting from this promotion are so astronomically high that the Market won't be able to correct itself shortly after the promotion ends. The answer to this is a definite maybe. If left alone, the Market would take a substantial amount of time to adjust, but it is more likely that devs who have lost their rankings among the top paid apps have noticed what's going on, and will being putting forth even more effort to regain their position.

One developer wrote to us confirming that at the start of the promotion, his app experienced a whopping 40% sales drop, which has since been compensated for by vigorous promotion and a special sale. If all devs excluded from this celebration followed the same model of invigorated promotion, things would likely balance out in short order. I can't help but think, however, that expecting developers to recover such losses through additional promotion/sales efforts is a bit unfair in this situation, and it's clear that we're not the only ones who've noticed this.

All of that being said, it's unlikely that there is anything particularly sinister behind the promotion. While the result that is currently playing out was certainly predictable, I don't believe that Google would intentionally disrupt the hierarchy of the Market simply to boost their 100 favorite apps. Rather, I think that boosted sales acted as an incentive for developers invited to participate, and there was likely little regard given to what impact other developers' sales may experience as a result of displacement from the Top Paid list. The next question is "can this be corrected?"

At first glance, I think it might have behooved Google to exclude the promotion's effect on sales from the popularity ratings of the promoted apps, thereby giving a relatively equal shot to developers who didn't make the cut. The problem here, however, is that apps in the promotion would not exactly receive due ranking, as the chances that popular apps would receive 0 purchases for a ten-day span is quite low. This would have (ironically) pushed the promoted apps down the list, which would be just as bad (if not worse) as forcing them up.

In the end, it is a difficult situation, without an apparent answer. On the one hand, it is unfair to expect devs to recoup from such a drastic drop in ranking, especially considering how much some apps rely on such rankings to make sales. On the other hand, it will always be the responsibility of app creators to promote their product and ensure that it stays on top, no matter what may happen. Either way, this promotion is a rough blow to some and a great benefit to others, resulting in polarized opinions.

The bottom line, in my opinion, is that the situation is definitely not ideal, but everyone involved will survive, and regardless of developers' additional promotional efforts or any other results of this promotion, the Market's top listings are sure to regain their composure sooner or later.

[Update: It's Back] YouMail Pulled From Android Market Due To A Complaint From T-Mobile Citing ...