Instagram, a widely popular photo manipulation and sharing service available exclusively on iOS (for now), has Android in its sights. Every graphic designer I know with an iPhone is obsessed with it for some reason, and those using Android phones have been pleading for an Android app for quite a while now. Not to worry - turns out that their prayers are going to be answered in the near future.

Update 12/7/11: Kevin confirmed at LeWeb 2011 that the app is being worked on by 2 Android developers, though no updated timeline was given.

In an interview with UK's Guardian newspaper, Instagram's CEO Kevin Systrom announced that the Android app, for which the company gets a large number of requests every day, is "on the horizon." It's taking some time for a small team of 6 to attempt to satisfy everyone while keeping the core product running perfectly, and it's a relief to find out Instagram will not be locked into the i-world in the future.

This is what the app looks like right now on iOS - I'm hoping to see a whole lot more green and quite a bit less blue when it comes out: 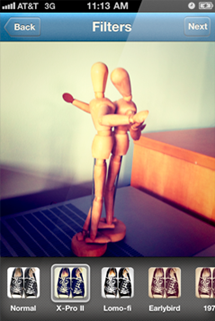 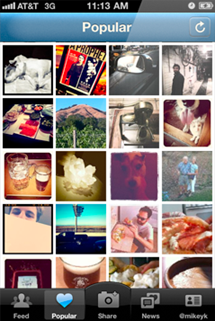 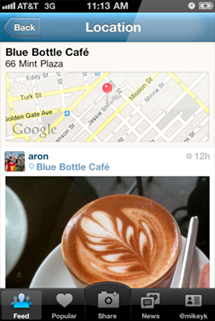 The relevant part of The Guardian's interview with Kevin is quoted below:

Systrom says that every day, Instagram gets a barrage of requests from people for an Android version of its app. The good news is that it's on the horizon.

"It's hugely important to us, but we're only six people," he says. "Android is a major priority for us, but first we have to build the team, and find the best people in the world to work on these projects." The company is currently hiring engineers and designers to help it move more quickly on all three of these aims.