Next in our series of reviews centered around Adobe's Touch Apps is Photoshop Touch, a nearly perfect paring-down of its desktop counterpart. While Photoshop Touch may be a little simplified, it still has a ton of features, and packs in almost all of the things I need for on-the-go photo editing.

Essentially, Photoshop Touch is a more basic version of the desktop software, with Creative Cloud connectivity and Android 3.1+ compatibility thrown in. Its simplicity is not a bad thing, however. PS Touch shares the same sleek, intuitive interface style as the other members of the Touch App family, and the Creative Cloud makes a fantastic addition.

If you haven't read my review of Adobe Kuler, you may not know about Adobe's Creative Cloud. The Creative Cloud is a new cloud-based storage system from Adobe, compatible with all of the new Touch Apps. Users will be granted access to the cloud, and given 20GB free storage. The Creative Cloud allows users to upload and download files to or from their desktop or tablet, which means you can work on just about anything on the go. The Touch Apps are compatible with just about any Adobe file type, from PDF to PSD to AI. This functionality is extremely impressive, and really allows the true power of the Touch Apps to shine.

It's important to make the point that the touch apps, PS Touch included, are not meant for finalizing images or creating finished products. Rather, the apps seem to be geared toward inspiration, concept work, early design, and presentation to clients. Keep this in mind as we discuss PS Touch.

Upon opening Photoshop Touch, the user is greeted with a familiar screen, which allows for the creation of a  new image, or the pulling of a photo from Google, Picasa, Facebook, your device's gallery, or of course, the Creative Cloud. This screen will also hold your saved projects in the future. Something that I should mention about opening/creating documents, is that PS Touch has a certain limitation in this regard. The app can only work with documents that have a maximum dimension smaller than 1600px. This puts a pretty big limitation on photo editing, and a damper on creating large images. Still, the app let's users pull images larger than 1600px, simply compressing them a bit to fit PS Touch's capabilities. 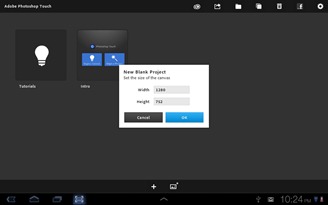 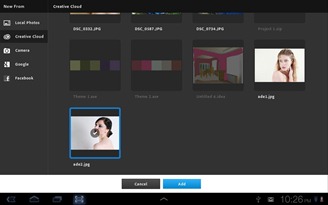 Once you've opened/created a document, the fun begins. I'll go over all of tools and buttons from left to right, and top to bottom. Starting in the top left corner, we've got a back button, which exits the current document (and asks if you'd like to save), the picture frame lets you add/open a new photo/image file for use in the current workspace. The pencil icon opens what is basically a simple Edit menu, allowing for cut, copy, paste, and extract functions. By default, the copy function copies only the selection on the active layer, but this menu allows you to copy from all layers at once with "copy merged." Next is the selection menu, a hugely useful menu allowing for (de)selection of an entire layer, selection of pixels, inverse selections, feathering, resizing, and edge refinement.

Across the way, we've got a transform tool, which allows you to resize and scale an image one axis at a time, followed by the "adjustments" tool, used for curves, color temperature, brightness, and other adjustments, as well as a handy "auto-fix" option, which will take a look at your image and decide what needs to be done automatically. While some of these tools are basic interpretations of the one's we love from Photoshop Touch's desktop counterpart, I was impressed by adjustments like Curves, which gives you all the functionality you need, including separate channel manipulation, and point creation. Really, I think the adjustment tools are some of the most important features in PS Touch, because they really get down to the sort of loose (or fine) adjustments you'd need from a photo editing app that's meant for fleshing out concepts or doing light work on an existing project.

Next is the 'fx' menu, offering simple artistic filters, ranging from sepia, to halftone, to pencil sketch and beyond. Personally, I don't find these filters very practical, except for generic, Picnik-like quick edits before uploading to a social media site.

The '&' menu sort of feels like an "everything else" list, including a mix of features, from image resizing and cropping to adjusting fill and stroke, to utilizing gradients and text. As I said before, the adjustment tools are really the meat of PS Touch (besides the brush tools), and while cropping and resizing are super practical, the others don't necessarily come into play in my everyday work flow, and I certainly don't need them for the type of minor edits I'd be doing on a mobile app. That being said, they're nice to have just in case, and add an extra something to the app. 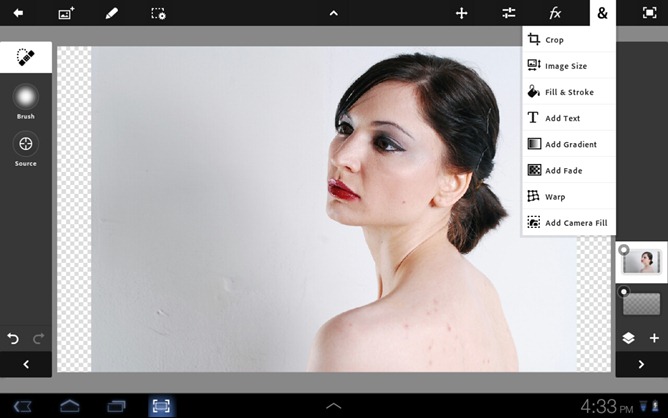 Next, we've got the tool panel at the left of the screen, reminiscent of the tool bar from the desktop version of Photoshop. The tool panel includes an eraser, paint brushes, a healing brush, clone stamp, and, for some reason, blur and smudge tools. Brushes have a surprising amount of functionality. The user can adjust size, hardness, opacity, and flow with intuitive sliding motions. The color can also be adjusted by a variety of means, including a full color palette, hue/saturation/brightness sliders, or a palette of pre-selected colors.

Speaking of colors, this is where PS Touch disappointed me – the app does not allow for importing Kuler themes. This may seem like a small complaint, but I think that adding this level of integration and compatibility would really complete the idea of the Touch App family as a cohesive group of apps meant to work together. 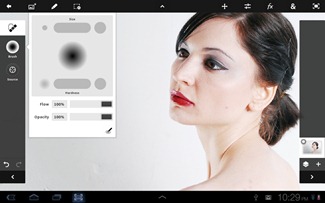 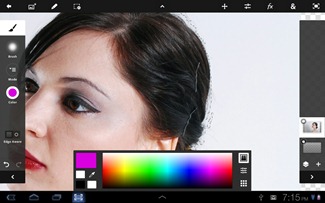 Most of the other tools are exactly what you'd expect, with the exception of the selection tools. Adobe has added in PS Touch a "scribble selection" tool, which makes automatic selections based on scribbles indicating which parts of the image you'd like to keep and remove. The tool does an okay job, and the selections can be refined with more scribbles, but I wouldn't rely on it for very fine selections. At the bottom of the panel, there are simple, accessible undo and redo buttons. After using PS Touch, I found myself wishing that the same buttons were present in the desktop software, as they are incredibly handy when using a less sophisticated tablet input device. 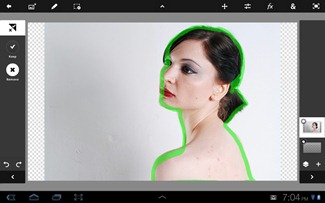 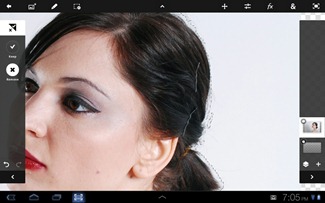 Finally, on the other side of the screen is the layers panel. Here, users can manage layers, adding new layers void of content, or photo layers, which allow you to use an image pulled from any source as its own layer. Familiar blending and opacity options are also present, which was a nice surprise, and really adds some sophisticated functionality. 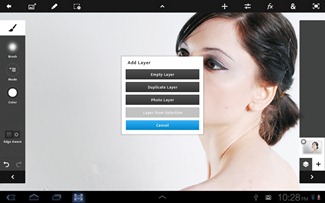 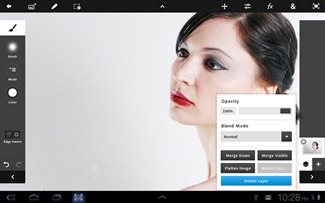 My overall feeling toward Photoshop Touch is positive. It is a capable tablet-optimized counterpart to the famous desktop software, and has all the features I feel I'd need to get some quick concept work or light editing done with photos. It has a few limitations that could cause inconvenience, but overall it's a great app. Like the rest of the Touch Apps family, it's intuitive, clean, easy to use, and performs consistently.

Surprisingly, I don't see myself using PS Touch nearly as often as some of the other touch apps, not because it isn't a fantastic app, but simply because I don't typically begin my photo workflow until I can plug into a computer. If you were working in conjunction with Adobe Debut to create a presentation including photographic images, I could see PS Touch being extremely useful, however. If you're remotely interested in mobile photo editing, or want a cohesive experience across the Touch Apps with photographic assets, I would definitely recommend the small $10.00 investment necessary to obtain Photoshop Touch.

Official Photos Surface – Moto's Droid 4 Looks Like The RAZR's Smaller Cousin (With A ...