Coming in at number seventeen in our shootout, NetQin Security Pro is a security app that offers a lot more than your average anti-theft protection, even if that means skimping a little on features that may help you recover your lost device.

First, I want to comment on NetQin's design. The app's overall appearance is clean, and relatively well thought out. The main screen gives you access to all the app's main features, and the layout makes it virtually impossible to misstep. Speaking of features, NetQin has plenty of them, including anti-virus, privacy protection, traffic management, and anti-theft options. It's great to see so many extra features, and NetQin certainly goes beyond your basic anti-theft app.

First up is NetQin's anti-virus protection. The user can execute a quick scan, full scan, or customized scan, which checks updatable virus definitions. Additionally, NetQin's anti-virus functionality can be enabled for real-time protection, and can even be set to check URLs for malware. While performance is consistent, different virus scans may of course take more or less time, depending on the depth of the scan. 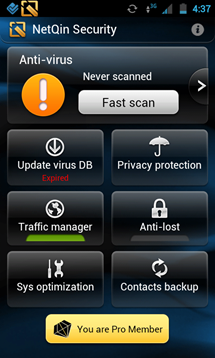 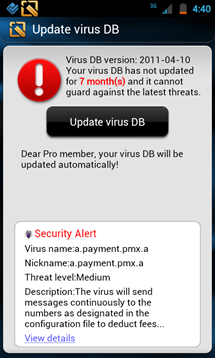 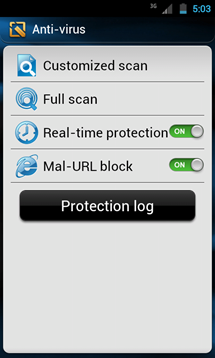 Next we've got privacy protection. This is a useful feature for those concerned with app security, giving users access to lists of which apps have special permissions, covering everything from contact access to device info to location tracking. NetQin will tell you how many apps have access, and give you a list of just which apps are included in that total. 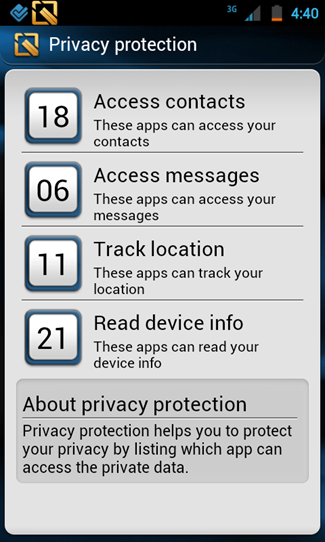 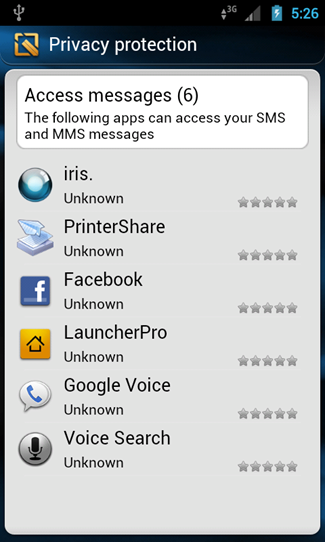 Traffic manager is another handy feature (one that you can expect to be native in Ice Cream Sandwich), telling you how much data you've used recently, and allowing alerts to be set up to make you aware of any overages against your planned quota. While it isn't as sophisticated as the feature we're expecting in Android's next OS iteration, it is nonetheless a nice feature for those with limited data plans. 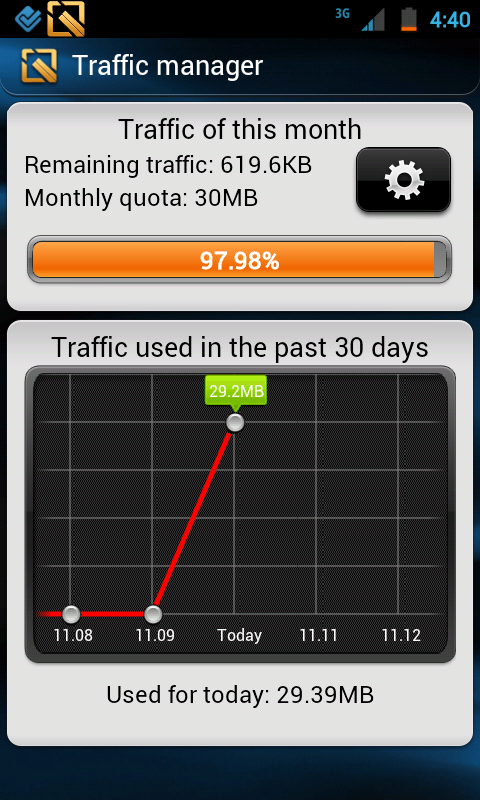 Next is the real meat of the application – the anti-theft features. NetQin's mobile app has previews of all its features, but the web interface is where the real action comes into play. NetQin may not have many anti-theft features, but the features it does have work consistently and quickly. Before continuing, it's worth mentioning that the online interface has the functionality to handle backups made by the mobile app (though the mobile app only backs up contacts), as well as a personal calendar (I have yet to figure out why I'd need a calendar attached to my security app, but it does allow for Google Calendar import), and you can check your security status at the click of a button as well. 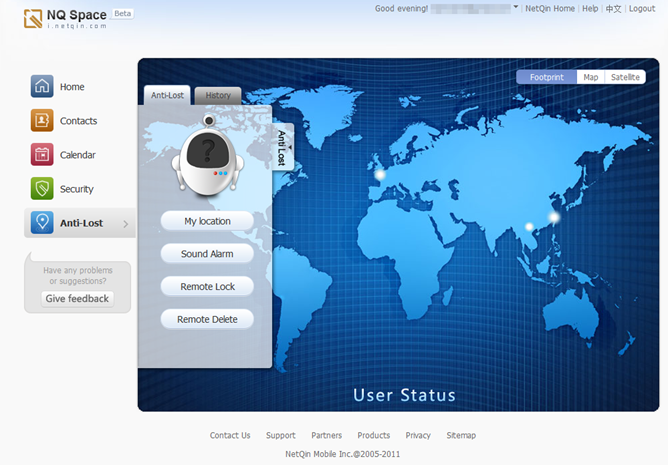 Using a super sophisticated-looking map interface and a series of high tech animations, NetQin can send a command to your device, pinpointing it in one hundred seconds or less. Unfortunately, I wasn't able to get this feature to work on my devices, but it seems promising if you can get it to function.

Before going any further, I should mention that NetQin allows for SMS commands, which are protected by your personal password. This is good, because it means that you won't have to rely on a data connection to locate your lost device. On the down side, NetQin does not automatically enable GPS or Wi-Fi, so you may not be able to find it if your GPS is turned off. 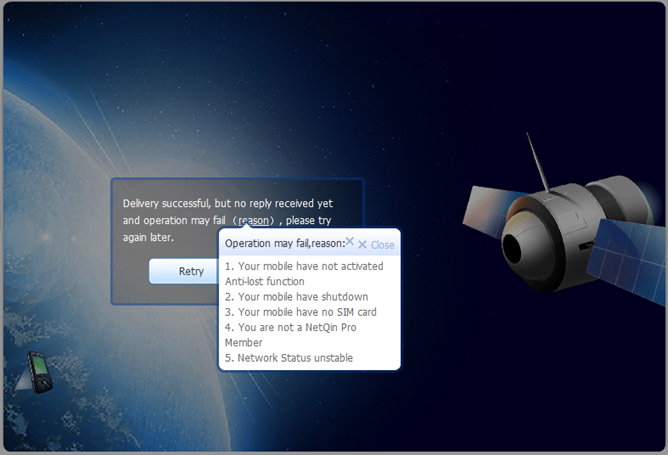 Moving on, we've got the alarm feature, which is just what you'd expect – triggering a full-volume alarm that sounds akin to a police siren, until someone enters your password. This could certainly prove annoying for any thief that happens to get a hold of your device. Following that is the remote lock feature, which, again, is just what you'd expect. A familiar lock screen matching the UI of the mobile app, requiring your password to unlock the device. Finally we have the "remote delete" function, which is more or less a data wipe, cleaning out all of your personal data including contacts, messages, etc. It's important to note that this is not a factory reset, so NetQin, while lacking root support, will still hang around after deleting your data. 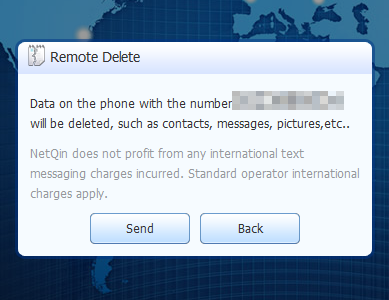 Back at the mobile app, we have a "System Optimization" function, which is actually a task manager/app killer, allowing you to view running apps and kill them as you see fit. Not the most practical feature, but a nice touch nonetheless. 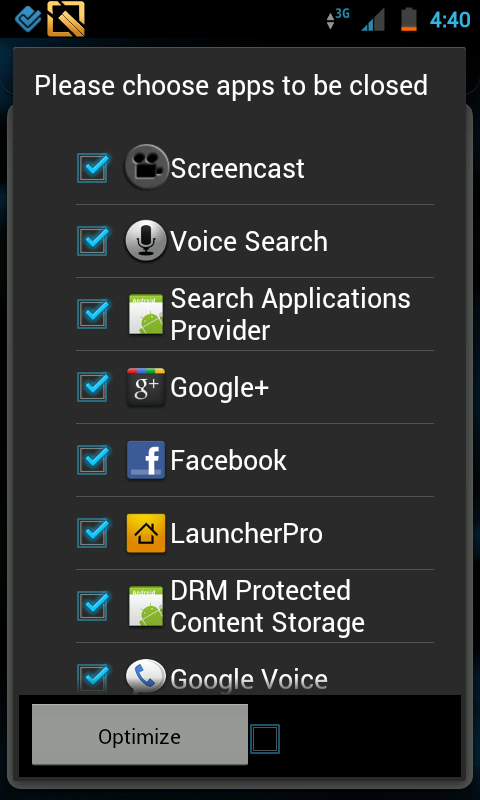 Finally, we have the contacts backup option, which does just what it says. Contacts will be backed up to your online profile, and can be restored either online or right from the mobile app. 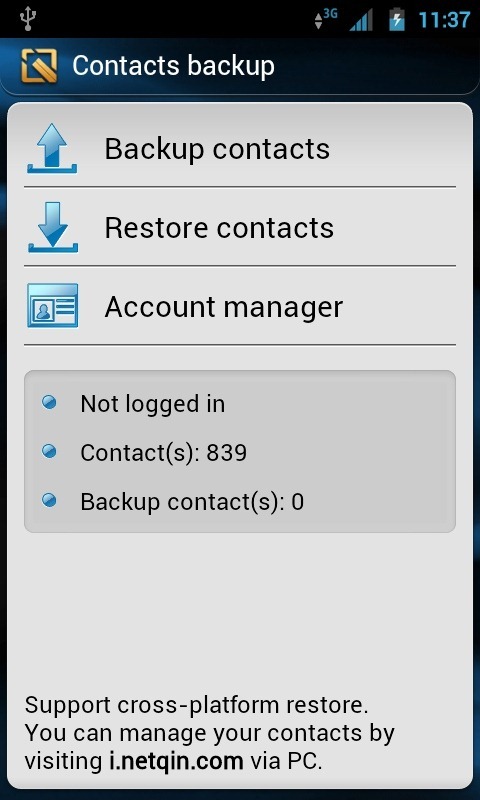 In the end, NetQin makes a unique entry in the shootout, offering anti-theft features, but not focusing exclusively on them. Instead, the app focuses on a well-rounded security system, which, while it has some flaws, also works pretty well in most instances.

Overall NetQin is capable, but not perfect. At $7.99 for three months, $12.99 for six months, or $19.99 for a year, NetQin isn't the cheapest solution or the strongest in case of theft. What's great is that it offers a chance to test out its features before committing, but in all honesty I'd say that this app is more suited for those who aren't too concerned with theft prevention, and perhaps more concerned with anti-virus protection and data monitoring. That being said, there's no reason not to try the app out as a trial, because it does have a lot to offer. For information on subscriptions, visit NetQin's website.

Still Not Convinced That Face Unlock Is Easily Fooled By A Photo? Here's Another Video Showing ...