At midnight EST, Adobe released the much-anticipated  family of Touch Apps to the Android Market, bringing an incredible array of design tools to Android 3.1+ tablets everywhere for $9.99 a pop. The list of included apps is, no doubt, impressive, including Kuler, Photoshop Touch, Debut, Ideas, Collage, and Proto. We've got full, hands-on reviews of each in the works, but in the meantime, it's worth summing up each of the apps individually.

Before digging into the individual apps, it's important to mention Adobe's Creative Cloud. The Creative Cloud is what brings Adobe's Touch Apps together, allowing users to upload and download content in a variety of formats to and from the cloud, connecting Android Tablets and desktop machines. This is brilliant, mainly because users can pull a variety of Adobe file formats to just about all of the Touch Apps, as well as pushing and pulling color themes from Kuler to other apps (more on that later).

Not only do the Touch Apps connect to the Creative Cloud, but users can pull assets from other sources as well, including Facebook, Picasa, Flickr, their device's camera, and even Google Searches.

Those who buy one of Adobe's Touch Apps will have access to the Creative Cloud, which offers an ample 20GB of cloud storage for free. Adobe representatives did not reveal plans to expand to a subscription-based service, but indicated that any such decision would be made on a need basis.

First up is Photoshop Touch, a name that grabs attention, and rightfully so. While PS Touch is definitely a stripped down version of its desktop counterpart, it has all the functionality you really need, plus a few extra quirks and handy tricks for photo editing on the fly. All of your basic manipulation options are present, including curves, cropping, resizing, sharpening, etc., despite functioning in more simplistic ways. Also present are the more basic "fx" functions, allowing for creepy vignettes, half-toning, and various other generic effects. 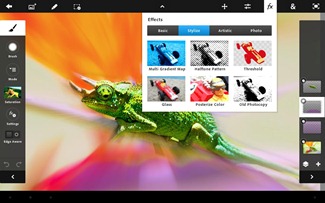 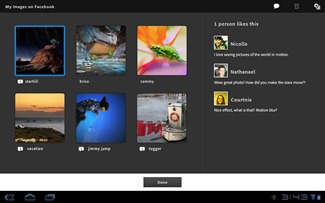 As with all of the new apps, PS Touch has an incredibly easy, intuitive interface, and genuinely raises the bar for mobile image editing.

Based on Adobe's popular online color scheme tool, Kuler is one of my personal favorites in the Touch lineup, offering a highly sophisticated color theming solution, allowing users to create various color themes from images, captured photos, or their imagination, according to rules which dictate what type of scheme will result (ie monochromatic, complementary, triad, etc.). Users can also fine-tune color schemes to their exact liking, allowing for a practically unlimited range of options. 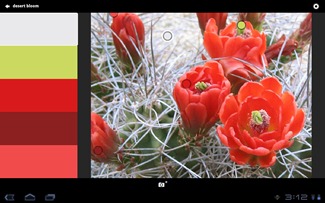 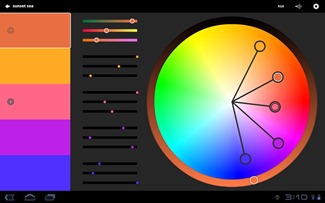 Color schemes can also be pulled from the cloud, and users can choose from previously saved schemes as well as those uploaded by other users. Kuler may look simple at first glance, but it is certainly a highly versatile, sophisticated app, particularly when considering that saved themes can be pulled by other apps as well, giving you quick access to all your favorite colors and their respective tonal harmonies.

Adobe Ideas is an app that has actually been available for iOS for a while now, but the key difference between its previous iteration and Android implementation is its connectivity to the Creative Cloud. Adobe Ideas is marketed as an app that allows users to utilize inspiration "as it hits," providing a sharp set of vector drawing tools and compatibility with Kuler, which come together to form a surprisingly versatile app, making it easy for users to come up with ideas based on their surroundings or imagined concepts with handy support for both photo and drawing layers. 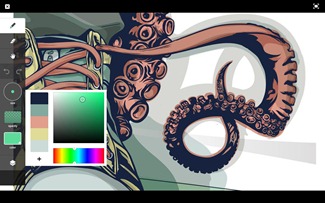 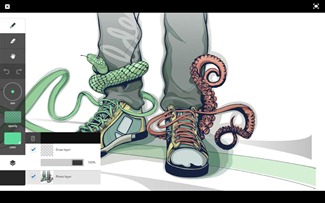 Adobe Debut provides a nice presentation solution, pulling together all your efforts from the other members of the Touch App family, and assets from the cloud as well. Users can import multiple file types at once, and even choose which layers will remain visible in the final presentation. Besides a dynamic slideshow interface, debut offers a variety of markup tools, allowing users to make note of suggestions or thoughts on the fly, applying them to any slide, and making them invisible again for presentation. 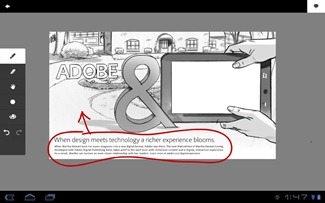 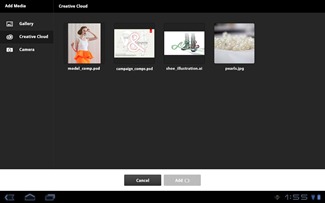 The concept behind this app is simple, but it is executed flawlessly. Debut is another great example of the potential of the Creative Cloud in facilitating designers and artists with easy, intuitive mobile workflow options.

Proto is Adobe's solution to web design on the fly, using the Creative Cloud coupled with an extremely intuitive gesture-based design system to create an incredibly easy experience in preliminary web design. 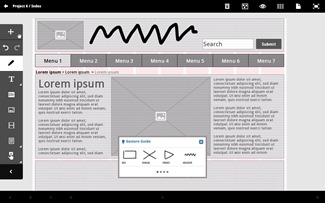 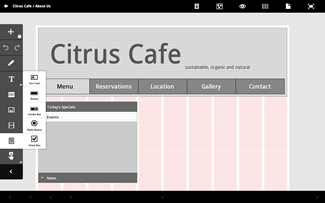 Proto allows for a variety of practical options, facilitating multiple pages (which can be actively linked together from within the app), video embedding, image placement, text flow, font formatting, interactive element creation, and much much more. The number of features packed into this app is simply astonishing, especially given its breezy, hassle-free interface.

Finally, we have Adobe Collage, an app that is geared toward the creation of conceptual mood boards. For those unfamiliar with the idea, a mood board is essentially a conglomeration of images, words, markup, and other media that represent a fragmented conceptualization of the overall tone, theme, or mood of a project. For example, the art director for a fashion shoot may collaborate with stylists as well as hair and makeup artists to create a mood board, showing how all the stylistic elements come together in a common conceptualization. 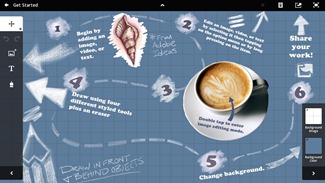 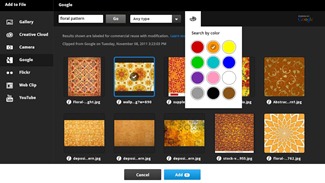 Collage really shows off Adobe's Creative Cloud integration, because mood boards are heavily reliant on images. What's unique in Collage, however, is that the user can actually include video clips from YouTube, which are playable as part of the mood board, and can be rotated, resized, and marked over. Users can also perform image searches based on color, an awesome feature that makes Collage all the more versatile.

Overall, Adobe has made an incredibly strong showing with the release of the Touch family of apps, providing artists and designers with innumerable tools and methods of conceptualizing, beginning, continuing, and presenting their work. I am both impressed by Adobe's new collection, and fully satisfied, as every app in the family lives up to the standard I'd expect from the authority in digital media creation.