We knew that ASUS would be far from the only manufacturer working on a new tablet featuring the beastly NVIDIA Tegra 3 and Ice Cream Sandwich, and Engadget got their hands on some exclusive details of an upcoming Lenovo tablet that looks to give the Transformer Prime a run for its money. The tablet, said to be out by the end of the year, not only packs the Tegra 3, but 2GB of DDR3 RAM, a full-size USB port, a "fusion-skin body," and a fingerprint scanner/optical joystick on the backside, all powered by Android 4.0. 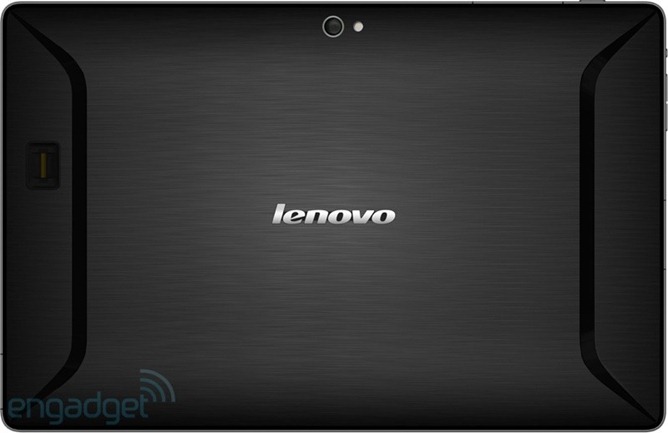 Sorry, no pics of the front. Seems some leakers happen to "skip" the important details.

The most interesting feature of this slate is undoubtedly the fingerprint scanner/optical trackpad on the backside. While this is an interesting design choice, its use seems practical in nature -- but it's hard to say for sure until we spend some hands-on time with the device.

Unfortunately, there's no word of a suggested price for this seemingly-impressive device, but I imagine it will be pretty competitive with the Prime. Given the choice between the two (and assuming they have similar price points), which would you choose -- the razor thin, keyboard boasting Prime, or the Lenovo tablet, with an on-device USB port and and extra geebee of RAM?

[Video] Paradroid Is A Self-Navigating, Skydiving Robot Controlled By An Onboard Android Handset